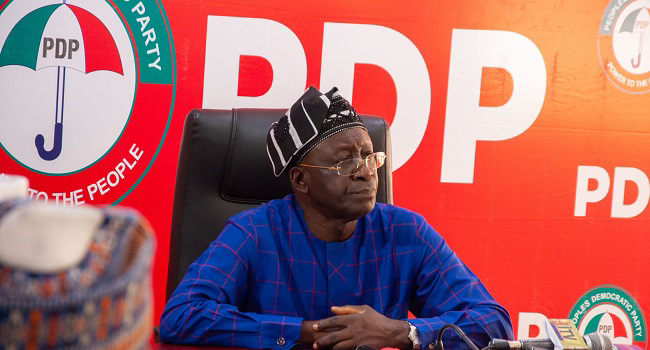 The Peoples Democratic Party (PDP) publicity secretaries in the south-west have opposed the calls for the resignation of Iyorchia Ayu, national chairman of the party.

The party spokespersons in Ondo, Ogun, Ekiti and Lagos, after a meeting in Lagos, on Saturday, said there is no “justification” for the calls for Ayu to step down from his position.

Ayu has been under pressure in the past few months, with demands for his resignation coming from different quarters, especially the camp of Nyesom Wike, governor of Rivers state.

Last week, Seyi Makinde, governor of Oyo, also demanded the resignation of Ayu.Makinde made the demand at the PDP south-west stakeholders’ meeting in Ibadan, the capital of Oyo state — with Atiku Abubakar, the party’s presidential candidate, present.

“The message from the south-west PDP is that the south-west is asking that the national working committee (NWC) of the PDP should be restructured,” the governor had said.

“We are asking the national chairman to step down so that the south will be fully included. That is the message.”

However, in a statement issued after their meeting on Saturday, the party’s publicity secretaries in the south-west said there was no prior meeting where stakeholders in the geo-political zone agreed that Ayu should vacate office.

“We do not see any justification for the resignation of our National Chairman, especially at this very critical stage of preparation for elections,” the statement reads.

“Dr Iyorchia Ayu was duly elected at a properly constituted National Convention with a four-year mandate and recently received a vote of confidence of the party’s National Executive Committee, at its 97th meeting in Abuja.

“Our party has championed the sanctity of the PDP Constitution (2017 as amended). We must, therefore, do everything to maintain this sanctity. Any action that undermines the spirit of the party’s constitution at this crucial stage can only be considered a deliberate attempt to sabotage the party’s efforts at winning in the coming general elections https://6883a0e1969d05f34b13d72345287174.safeframe.googlesyndication.com/safeframe/1-0-38/html/container.html?n=0

“The concern of our zonal leaders and their determination to protect the interest of our members against any form of marginalization is deeply appreciated. However, our focus should be directed mainly to encouraging our teeming members to rally around our candidates vying for the Houses of Assembly, House of Representatives, Senate and Governorship positions and ensure that they win elections.”