Soludo Sworn In As Anambra Governor In Low-Key Event 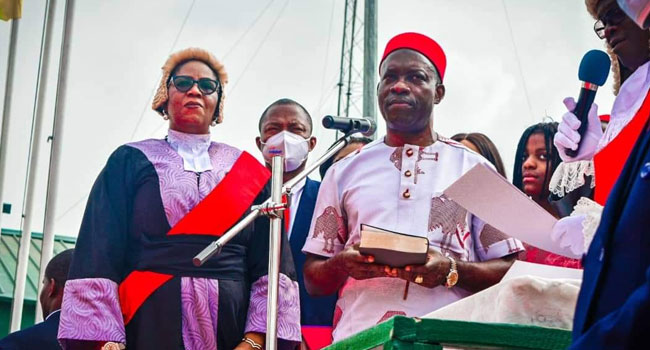 Charles Soludo has been sworn in as the fifth governor of Anambra State in a modest event that took place at the Government House on Thursday. Soludo took over from Willie Obiano.

The former Central Bank of Nigeria (CBN) governor took the oath of office alongside his deputy, Onyeka Ibezim.

In his inaugural speech, Soludo promised to make the state an economic hub, calling on sons and daughters of the state to work with him to achieve that goal.

Some of those who attended the event include the National Chairman of the All Progressives Grand Alliance (APGA), Victor Oye and wife; Speaker of the Anambra State House of Assembly, Uchenna Okafor and wife; Sen. Victor Umeh and wife; Bianca Ojukwu, clergymen, traditional rulers among others.

There was heavy security at the venue, hours before the event as guests began to arrive for the programme. Routine security checks were carried out on them before entering the venue.

A circular by the state government showed that about 50 persons were invited for the ceremony as Soludo said he wanted a low-profile event.