Shocking Oscar Moment: Will Smith Smacks Chris Rock In The Face During Oscars After Joke About Wife Jada Pinkett Smith 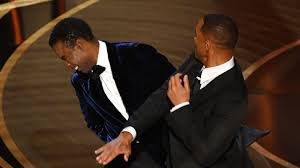 In a moment that will go down in Oscars history, as the 94th Academy Awards neared its end, one of the biggest surprises rocked the night: An intense exchange after Will Smith confronted Chris Rock after Rock made a joke about Smith’s wife Jada Pinkett Smith’s hair. Just minutes later, Smith won his first Oscar, taking home Best Actor for his role in “King Richard.”

Rock joked that he was looking forward to a sequel to “G.I. Jane” starring Pinkett, leading Smith to make his way to the stage and then smacking Rock.

After taking a seat, Smith shouted back to Rock to “keep my wife’s name out of your f******* mouth.” The exchange came as a surprise to many in the audience, as actress Lupita Nyong’o, who is seated near Smith, and could be seen on camera, was completely shocked.

While the show was on a commercial break, The Hollywood Reporter’s Scott Feinberg tweeted footage of Smith being pulled aside and comforted by Denzel Washington and Tyler Perry. Smith eventually made his way to his seat, and appeared to wipe tears from his eyes

In his acceptance speech for best actor Sunday night, Will Smith apologized to the academy and his fellow nominees after the buoyant spirit of the 94th Academy Awards was rocked by an unbelievable exchange between him and comedian Chris Rock.

When Smith accepted the Oscar for Best Actor, he emotionally said that Richard Williams, who he portrayed in “King Richard,” was a “fierce defender of his family.”