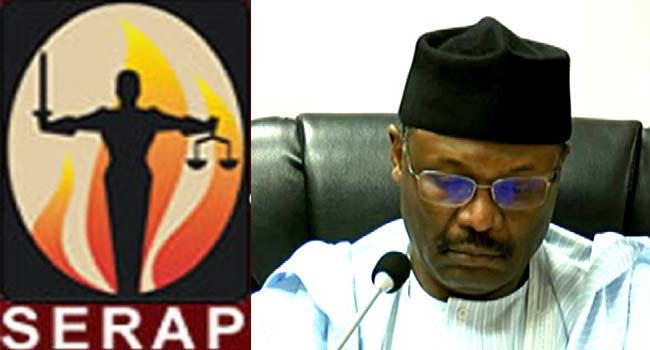 Recall there were several arrests of those involved in vote buying in the recently concluded election in Ekiti state.

SERAP claimed there was a brazen pattern of vote-buying and electoral bribery including bargaining prices for votes at several polling units during the election.

In the suit number FHC/ABJ/CS/1189/2022 filed last Friday, July 22, at the Federal High Court, Abuja, SERAP sought “an order of mandamus to direct and compel INEC to seek and obtain detailed information about reports of vote-buying by the three leading political parties in the 2022 Ekiti State governorship election.”

SERAP also sought “an order of mandamus to direct and compel INEC to promptly and effectively prosecute those arrested, and to bring to justice anyone who sponsored, aided and abetted them.”

SERAP is arguing that, “Vote-buying is a threat to fair and representative elections. Vote-buying amounts to undue influence and improper electoral influence.”

According to SERAP, “Wealthy candidates and their sponsors ought not to be allowed to profit from their crimes. Arresting and prosecuting vote-buyers will end widespread impunity for vote buying ahead of the February 2023 general election.”

SERAP is arguing that, “Vote-buying encourages poor governance and weakens citizens’ capacity to hold their ‘elected officials’ accountable for their actions.”

“Vote-buying undermines the ability of INEC to discharge its responsibilities under Section 153 of the 1999 Nigerian Constitution (as amended), paragraph 15(a) of the third schedule of the Constitution, and the Electoral Act 2022.”

Corruption of the ballot box intrudes on the freedom of Nigerian voters to make up their own minds. Vote buying and other forms of electoral corruption freeze out the less wealthy candidates and parties.”

When political candidates or their sponsors decide to buy the support of the people rather than contest fairly for their votes, there are possibilities that such candidates and sponsors will show a disregard for democratic rules and a disposition to adopt illegal means becomes inevitable.”

The suit filed on behalf of SERAP by its lawyers Kolawole Oluwadare and Opeyemi Owolabi, read in part: “Vote buying is entirely an act of election malpractice connected with vested interest since an election can be said to be free and fair when it is devoid of vote buying.”

“One of the people’s most sacred rights is the right to vote. INEC has a constitutional and statutory responsibility to ensure the effective exercise of the right of all eligible voters to participate in their own government in free and fair elections.”

“Preventing and combating vote buying and electoral bribery would advance the people’s right to vote and to participate in their own government, as well as bolster the ability of INEC to effectively discharge its constitutional and statutory mandates.”

“Many years of allegations of vote-buying and electoral bribery and entrenched impunity of perpetrators have undermined public confidence in the electoral process.”

“Prosecuting allegations of vote-buying and electoral bribery would be entirely consistent with the Nigerian Constitution, the Electoral Act, and the country’s international human rights anti-corruption obligations.”

“Agents of the three dominant political parties in the state, namely the All Progressives Congress, the Peoples Democratic Party and the Social Democratic Party were reportedly involved in buying votes across the
state, and voters offered as high as N10,000 in exchange for their votes.”

“The Nigerian Constitution provides in Section 14(1)(c) that, ‘the participation by the people in their government shall be ensured in accordance with the provisions of this Constitution.’”

“Section 145(2) of the Electoral Act provides that, ‘a prosecution under this Act shall be undertaken by legal officers of the Commission or any legal practitioner appointed by it.’”

PREVIOUS POST Terrorists threaten to kidnap President Buhari, El-rufai
NEXT POST Any police officer who slaps or flogs you has committed an offence- Adejobi