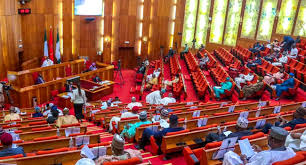 Following the controversy trailing a court judgment on section 84(12) of the amended Electoral Act last week, the Nigeria Senate will on Wednesday consider a motion to that effect.

Justice Evelyn Anyadike, in a judgment, held that, that Section of the Act was “unconstitutional, invalid, illegal, null, void and of no effect whatsoever and ought to be struck down as it cannot stand when it is in violation of the clear provisions of the Constitution.”

Consequently, the court ordered the Attorney General of the Federation to “forthwith delete the said Subsection 12 of Section 84 from the body of the Electoral Act.”

Justice Anyadike in the Suit FHC/UM/CS/26/2022 held that Sections 66(1), 107(1)(f) of the 1999 Constitution already stipulated that appointees of government seeking to contest elections were only to resign at least 30 days to the date of the election.

According to her, any other law that mandates such appointees to resign or leave the office at any time before that was unconstitutional, invalid, illegal, null and void to the extent of its inconsistency with the clear provisions of the constitution.

However, coming under order 42 of the Senate Standing Orders on Personal Explanation, Senator George Thompson Sekibo (PDP, Rivers East) during plenary, challenged the judgment of the court on Section 84(12).

Citing Section 4 of the 1999 Constitution (as amended, Sekibo said the National Assembly is empowered by virtue of its provisions to make laws for the peace, order and good governance of Nigeria.

He added that Section 228 lists such functions to include making laws to ensure internal democracy within political parties.

He argued further that the provisions of Section 318 of the 1999 Constitution clearly defines who a public servant is, without including political appointees.

“I don’t have anything against the Judge, but Mr. President, what is relied on in the judgment is not in tandem with the interpretation of the Constitution.

“The Constitution defines for us who is a civil servant and who is a public servant. It does not include political appointees.

“More so, Section 4 gives us the power to make good laws, and in our mind, any law we make here is good law.

“Section 228 gives us also the power to make certain laws to guard the Independent National Electoral Commission to effectively discharge its functions.

“We felt that Section 84(12) as enshrined in the Electoral Act assented to, is for the interest of the people and country.

“I don’t think that somebody should go to court without joining the Senate or the House of Representatives where this law emanated from, because we are the origin of the law before the President assented to it.

“If you think it is faulty, you either take us to court and make us part of that case. We did not know, we were not told and they just went there and got a judgment, destroying our work for over one year as if no one here has the head to do any good thing”, Sekibo said.

The Deputy Senate President, thereafter, put the question for a motion to be brought to the floor during plenary on Wednesday.

The voice vote received the overwhelming support of lawmakers for the motion to be considered.