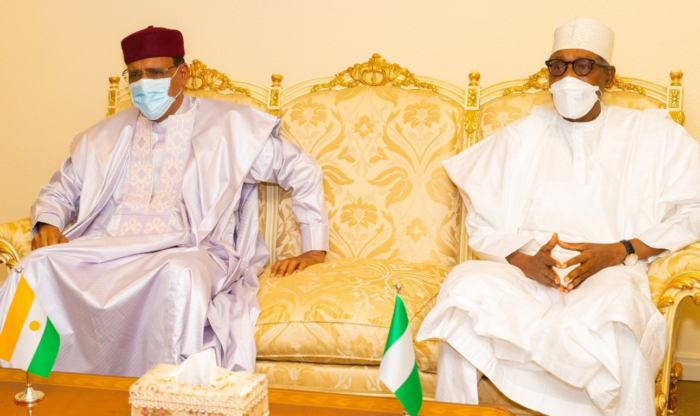 Bazoum spoke with state house correspondents after his visit to President Muhammadu Buhari on Thursday in Abuja.

The Niger Republic president said the West African region is battling an increased level of security threats, especially in the wake of the recent attack on the Abuja-Kaduna train.

He thanked Buhari for his support towards the multinational joint task force (MNJTF), saying Nigeria’s financial intervention has made the operation successful.

“The multinational joint task force is a model initiated by countries that are facing the same kind of security challenges and we want to replicate this kind of model in countries of the Sahel, Mali, Niger, Burkina Faso and so on,” he said.

“Because this model has allowed us in the Lake Chad Basin region to address a common threat and we are very much satisfied with the situation because it has allowed us to contain it and we want to replicate the same in our countries.

“I must also commend the efforts of the governor of Zamfara state. Also, what happened recently in Kaduna indicates that there is an increase in the level of threats we are facing and which means that we have to design a new strategy to be able to address these threats.”

Bazoum said he discussed the Kano-Katsina-Maradi railway project with the president and its potential benefits to both countries.

“I’m here to thank President Buhari for his effort at ensuring that this project has taken off and I hope that it will be sustained because this project will radically change the trading exchange between the two countries,” he said.

“We also spoke about the gas pipeline in the sense that gas and oil now have become an issue in world politics, in the world economy