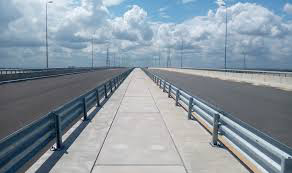 The Federal Government says the Second Niger Bridge linking Anambra and Delta states will soon be open for public use.

Minister of Works and Housing, Babatunde Fashola, disclosed this at a ministerial press briefing in Abuja on Wednesday.

He said the Second Niger bridge itself has been “finished” and “people can walk through the bridge now unimpeded”.

According to him, what remains to be completed is the four-kilometer link road on the Asaba side.

He noted that the Lagos Ibadan Express Way and Second Niger Bridge will be completed by the end of the year while the main Carriageway of Abuja-Kaduna-Zaria-Kano expressway is scheduled for completion by the second quarter of 2023.

The Second Niger Bridge was first proposed during the 1978/79 political campaign by then-candidate Shehu Shagari of the National Party of Nigeria (NPN).

However, in August 2012, the Federal Executive Council under then-President  Jonathan’s approved a contract worth N325 million for the final planning and design of the bridge.