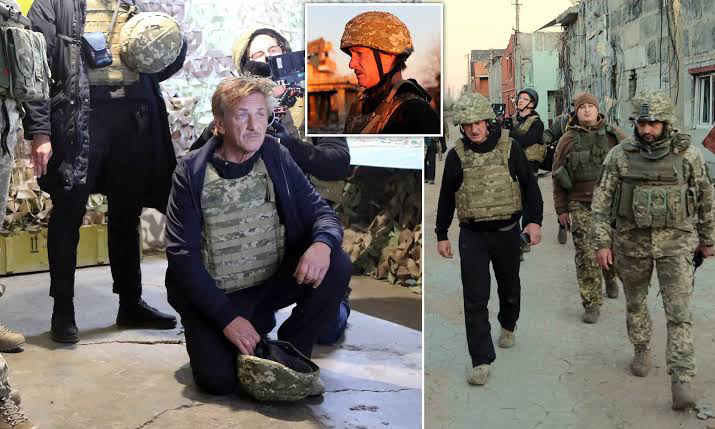 Sean Penn says he walked miles to make it to the Polish border as he continues to film a documentary for Vice on Russia’s invasion of Ukraine.

The actor tweeted on Tuesday, “Myself & two colleagues walked miles to the Polish border after abandoning our car on the side of the road. Almost all the cars in this photo carry women & children only, most without any sign of luggage, and a car their only possession of value.” Alongside that message, Penn shared a picture of himself dragging a taped-up suitcase down a road lined with unmoving cars.

The Oscar winner has been filming a documentary about the escalating conflict between Russia and Ukraine since November of last year. Over the weekend, Penn also shared his personal opinion about the invasion on social media, writing, “Already a brutal mistake of lives taken and hearts broken, and if he doesn’t relent, I believe Mr. Putin will have made a most horrible mistake for all of humankind.

President Zelensky and the Ukrainian people have risen as historic symbols of courage and principle.” He added in a second tweet, “Ukraine is the tip of the spear for the democratic embrace of dreams. If we allow it to fight alone, our soul as America is lost.”

Penn flew to Kyiv, the country’s capital, last week where he attended a government press briefing just hours before Russia began its attacks. In a statement to Newsweek, President Zelensky’s office said they are thankful for the actor’s presence and the attention he’s bringing to this conflict. “The director specially came to Kyiv to record all the events that are currently happening in Ukraine and to tell the world the truth about Russia’s invasion of our country,” the statement reads.

“Sean Penn is among those who support Ukraine in Ukraine today. Our country is grateful to him for such a show of courage and honesty…Sean Penn is demonstrating bravery that many others have been lacking, in particular some Western politicians. The more people like that—true friends of Ukraine, who support the fight for freedom—the quicker we can stop this heinous invasion by Russia.”