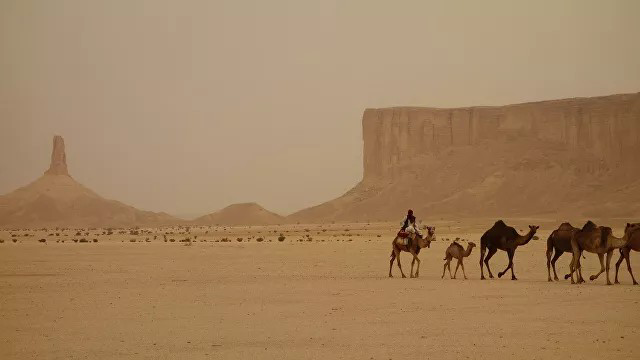 A group scientists in Saudi Arabia has developed a system capable of producing water in the desert and allowing crops to grow. According to their article, published earlier this month in the journal ‘Cell Reports Physical Science’, their device uses solar panels (known as photovoltaic cells) and a unique hydrogel, which researchers invented.

The way their invention works is as follows: Hydrogel is a powerful absorbent that can soak up water present in the atmosphere, even in arid areas. Since solar energy isn’t 100 percent efficient, there is always some “free” energy that heats the solar panel, which, in turn, heats the hydrogel.When the absorbent layer is heated by the panel, it releases fresh water that can be used to water crops. Thus, the equipment both generates electricity from solar energy and produces fresh water from ambient air.Researchers called their brainchild WEC2P, which stands for “water-electricity-crop co-production system”.

Universal access to fresh water is one of the Sustainable Development Goals set by the United Nations. Researchers hope that their device will help to achieve this goal.

“A fraction of the world’s population still doesn’t have access to clean water or green power, and many of them live in rural areas with an arid or semi-arid climate. Our design makes water out of air using clean energy that would’ve been wasted and is suitable for decentralised, small-scale farms in remote places such as deserts and oceanic islands,” said Peng Wang, professor of environmental science and engineering at Saudi Arabia’s King Abdullah University of Science and Technology, and lead author of the study.Scientists say they have successfully tested the system.

They grew spinach in a Saudi desert in June when daytime temperatures climb as high as 130°F (55°C). 57 out of 60 spinach seeds planted grew to 18 centimetres.Researchers are now working to transform their invention into a product by improving the hydrogel so that it will absorb more water from ambient air.

“Our goal is to create an integrated system of clean energy, water, and food production, especially the water-creation part in our design, which sets us apart from current agrophotovoltaics … I hope our design can be a decentralised power and water system to light homes and keep crops watered,” said professor Wang.

PREVIOUS POST Russia Opens Criminal Case Against Meta For ‘Calling For Murder’ Of Russians,Seeks To Designate It An ‘Extremist Organization’
NEXT POST UN Security Council Gathers in New York at Russia’s Request to Discuss US Biolabs in Ukraine