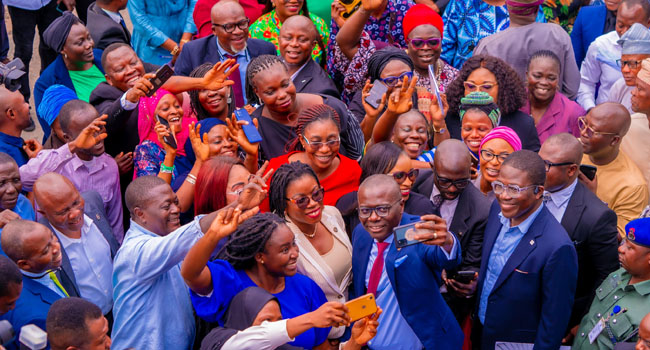 Ahead of the 2023 general elections, Lagos State Governor, Babajide Sanwo-Olu, on Tuesday said the state government will increase the salaries of civil servants in public office.

Sanwo-Olu made this announcement during his courtesy visit to the Head, Office of Public Service in Alausa, Ikeja, Lagos.

According to the governor, the decision of his administration to increase their salaries is a result of inflation in the country.

“This is Lagos, we are going to review it. We are going to ensure that we can indeed take care of our public service because once we do that, not only would we expect a lot more from you, but the citizens will see the benefit of doing the right thing.

“We don’t want the union to wait and hold us to ransom. We want a government that is proactive, reflects the yearnings of the people, and makes that happen.  Because you have not asked for that and I am here today, the salary increase is on the way and we will work it out as soon as possible.”

Sanwo-Olu told the civil servants that he will work closely with the Head of Service to ensure that vehicles for directors are delivered before the end of October.

He explained that the government will release 100 brand new cars for directors, with others to get theirs in subsequent phases.

On housing, the governor said his administration has commissioned about 16 housing estates for civil servants in the state.

He stated that the State Ministry of Housing will deduct a certain per cent to enable other civil servants to enjoy the housing benefits.