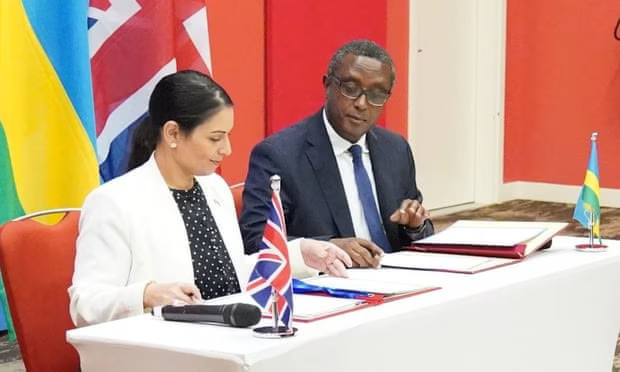 Opposition politicians in Rwanda have criticised its agreement to accept thousands of unauthorised asylum seekers flown from the UK, saying wealthy western countries should “own up to international obligations on the migration issues”.

Victoire Ingabire Umuhoza, the leader of DALFA-Umurinzi, said officials in Rwanda should focus on solving its political and social issues that made Rwandans seek refuge abroad before offering “to host refugees or migrants from other countries”.

A second opposition party, the officially recognised Democratic Green party of Rwanda (PVDR), said wealthy countries such as the UK “should not shift their international obligation to receive refugees and transfer them to third countries” just because they had “the money to influence and enforce their will”.

“Rwanda has already a high population destiny … and already land is not sufficient for us all, with a lot of land conflicts and competition for the natural resources,” the PVDR said. “Taking on migrants from UK will increase the land burden and survival challenges for the limited natural resources available.”’Why Rwanda?’: government immigration policy fiercely condemned – video report

Rwanda produced refugees too, said Ingabire. “These include Rwandan people who sought political and economic asylum in other countries. Such conditions do not in fact guarantee long term security in Rwanda and in the Great Lakes region.

“Rwanda has consistently ranked one of the world’s safest nations but at the same time consistently a country where its inhabitants are unhappy.”

Ingabire was jailed for five years on what supporters say were politically motivated charges after returning to Rwanda to contest elections in 2010. She said the British and Rwandan governments’ argument that relocating people to Rwanda would address inequalities that drove people from their homes was not credible.

The Rwandan president, Paul Kagame, is a divisive figure. He is credited with the development and stability Rwanda has experienced since the genocide in 1994, but he is also accused of intolerance towards any criticism, whether domestic or international. Kagame won a third term in power, with 98% of the vote, at elections in 2017. Opposition politicians in Rwanda face systematic harassment, arrest and detention by its security services.

Some critics have challenged the country’s much-lauded economic record. “Inequality is on the rise in Rwanda … Despite the praise it received internationally for its development, the Covid-19 pandemic has further exposed the shortcomings of Rwanda economic progress, especially in those areas needed for Rwanda to achieve genuine social and economic transformation for the wider population,” Ingabire said.

In October, nine people linked to DALFA-Umurinzi and a journalist were detained in crackdown on opponents and critics that seemed to be prompted by an event, “Ingabire Day”, which was organised by the unregistered opposition party to discuss political repression in Rwanda.