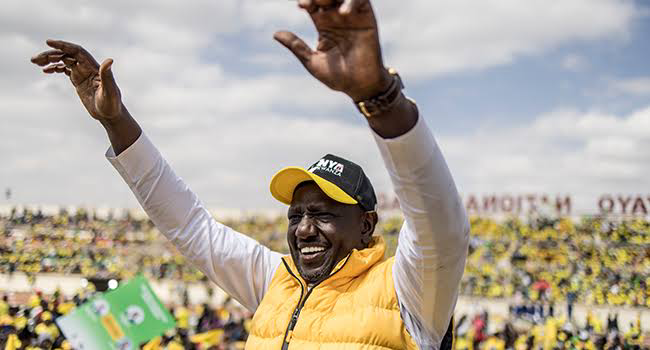 During his acceptance speech, the president-elect thanked votes and the embattled Independent Boundaries and Electoral Commission (IEBC) for keeping the election process fair and peaceful.

“In this election, there are no losers, The people of Kenya have won because we have raised the bar, in elections.  The hero in this election is the IEBC”

Ruto also praised his opponent, Raila Odinga, and promised to work with all elected leaders and all Kenyan leaders to fashion a country that leaves nobody behind.

“I will run a transparent and open government and will work with the opposition in their effort to provide oversight to my administration.” I promise to all the people of Kenya, this will be their government.”

He added that he will build on the foundation he and outgoing president, Uhuru Kenyatta put together to take Kenya to the next level.

“I am very confident that this country will come together and we can move forward as one democratic and prosperous republic.”

If no petition is lodged to contest Ruto’s win within seven days, he will be sworn into office as Kenya’s fifth president on August 30, taking over from Uhuru Kenyatta who has completed his constitutionally allowed two 5-year terms

Kenyans voted in six elections to choose a new president as well as senators, governors, lawmakers, women representatives and some 1,500 county officials.

Kenyatta, the 60-year-old son of the first post-independence president, has served two terms and could not run again.

The winner of the presidential race needed to secure 50 percent plus one vote and at least a quarter of the votes in 24 of Kenya’s 47 counties.

Observers say that with the race so close, an appeal to the Supreme Court by losing candidate Odinga is almost certain, meaning it could be many weeks before a new president takes office.

Turnout on polling day was lower than expected at around 65 percent of Kenya’s 22 million registered voters, compared with about 78 percent in the last election in 2017.

Observers blamed disenchantment with the political elite, particularly among young people in a country battling a severe cost-of-living crisis and a punishing drought that has left millions hungry.

In a historic first for Africa, the result of the 2017 election was annulled by the Supreme Court after Odinga challenged the outcome.

Dozens of people were killed in the chaos that followed the election, with police brutality blamed for the deaths.

Kenyatta went on to win the October rerun after a boycott by Odinga.

The worst electoral violence in Kenya’s history occurred after a disputed vote in 2007, when more than 1,100 people were killed in bloodletting between rival tribes