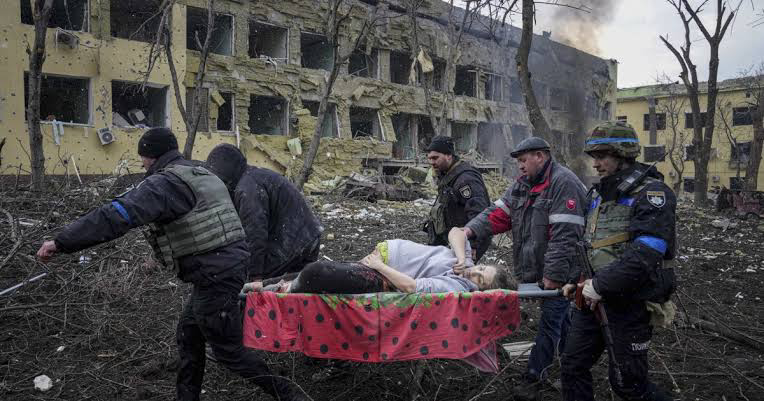 World leaders have condemned a Russian attack on a children and maternity hospital on Wednesday night.

Russia, in an airstrike, bombed the maternity hospital located in Mariupol, southern Ukraine leaving many injured.

While the White House described the attack as a “barbaric use of military force to go after innocent civilians”, Ukrainian President, Volodymyr Zelenskiy in a televised address accused Russia of genocide. He pleaded with world leaders to implement a no-fly zone over Ukraine.

He admonished Western leaders for cowardice and raged at Russia for its assault on his country’s civilians.

“Dropping a bomb on a maternity hospital — it’s the final proof that what is happening is genocide of Ukrainians,” he said.

An apparent Russian air strike destroyed the hospital in the besieged Ukrainian port of Mariupol, wounding at least 17 people. Zelensky said children were trapped under the wreckage and responders were still digging through the rubble. Images from the scene showed bloody, pregnant women being carried over the ruins on makeshift stretchers.

The strike came as Mariupol’s mayor said more than 1,207 civilians have died in the nine-day Russian siege of the southern city, with people left cowering without power or water under a barrage of shelling. City workers buried many of the dead in a mass grave 25 meters long at one of the city’s old cemeteries, and made the sign of the cross as they pushed bodies wrapped in carpets or bags over the edge.

“Today is the day that defines everything. It defines who is on which side,” Zelensky said in a video posted online. “A children’s hospital. A maternity hospital. What did they threaten the Russian Federation with?”

“Were there little nationalists there? Were pregnant women going to shoot missiles at Rostov? Did someone in that maternity hospital offend Russian-speaking people? Was it the ‘denazification’ of the hospital? This is beyond atrocities already,” he said. Russian President Vladimir Putin has claimed “denazification” of Ukraine as a reason for invading, a justification that is not taken seriously in the West.

Zelensky called the hospital attack a “war crime” that “reflects all the evil that the invaders brought to our land.”

He lashed Western leaders for inaction, after earlier in the day, a deal to supply fighter jets to Ukraine fell through due to fears of Russia’s response. He has also demanded Western countries declare a no-fly zone over Ukraine, which they have refused to do, since enforcing the measure would bring them into conflict with nuclear-armed Russia.

“Europeans, you can’t say you didn’t see what happened to Ukrainians. You saw. You know. You have to tighten the sanctions so that Russia no longer has any opportunity to continue this genocide,” he said.

Russia’s Foreign Ministry did not deny the attack on the hospital. It accused Ukrainian “nationalist battalions” of using the hospital to set up firing positions after moving out staff and patients. There was no evidence to support the claims, and images from the scene showed the facility was full of staff and patients.

International condemnation was swift, with the White House slamming the “barbaric” use of force against civilians, while British Prime Minister Boris Johnson called the attack “depraved.”

A UN spokesman said no health facility “should ever be a target.”

The attack came as women were in labor inside, the regional military administration in Donetsk told AFP.

Videos posted by the regional chief and city authorities showed a woman being evacuated on a stretcher, branches snapped from trees, burning cars and siding ripped from the building’s facade

The series of blasts shook the ground more than a mile away from the hospital. A blast crater in a courtyard extended at least two stories deep.