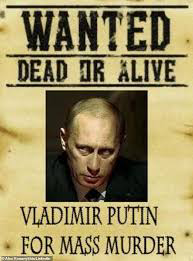 In a LinkedIn post that has since been taken down, entrepreneur Alex Konanykhim posted a photo of Putin and the words “Wanted: Dead or alive. Vladimir Putin for mass murder,” according to The Jerusalem Post.

“I promise to pay $1,000,000 to the officer(s) who, complying with their constitutional duty, arrest(s) Putin as a war criminal under Russian and international laws,” wrote Konanykhin on LinkedIn, according to The Jerusalem Post. “Putin is not the Russian president, as he came to power as the result of a special operation of blowing up apartment buildings in Russia, then violated the [Russian] Constitution by eliminating free elections and murdering his opponents.”

Konanykhin is a former banker and the current CEO of TransparentBusiness, a software company based in San Francisco, California.

He has denied that he put a bounty on Putin’s life.

“Some reports suggest that I promised to pay for the assassination of Putin,” Konanykhin wrote in an updated Facebook post on Wednesday. “It is NOT correct. While such an outcome would be cheered by millions of people around the world, I believe that Putin must be brought to justice.”

Konanykhim said he posted a similar message on Facebook, along with the “Wanted” photo, promising $1,000,000 to officers who arrested Putin as a war criminal, but it was banned by the social media platform. In a follow up post, he wrote his original message without the photo.

“I promise to pay $1,000,000 to the officer(s) who, complying with their constitutional duty, arrest(s) Putin as a war criminal under Russian and international laws,” Konanykhin wrote.

Konanykhin did not directly respond to Fortune’s questions about the bounty on Putin, but did say that propaganda was negatively affecting the lives of Russian citizens.

“I’m dismayed and outraged by the onslaught and war crimes Russia is committing in Ukraine. Putin cannot admit defeat or he risks to lose his power, which would almost certainly lead to his arrest. He has no legitimacy of an elected leader, as he eliminated free and fair elections, the news media and opposition a long time ago, so his power rests solely on fear he instills in his subordinates,” Konanykhin told Fortune. “He must be arrested before he makes an irreversible decision which may cost lives to many people.”