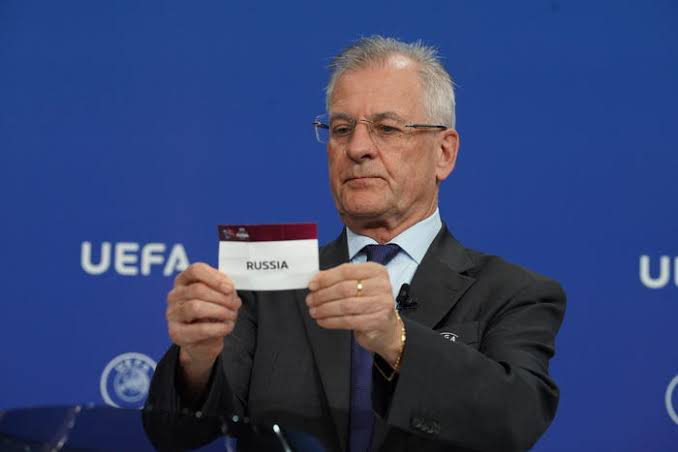 Russia has been warned off bidding to host the men’s European Championship in 2028 after it submitted an unexpected declaration of interest in staging the tournament.

Uefa confirmed that Russia, the subject of a series of sporting bans after the invasion of Ukraine, had joined Turkey and the UK and Ireland in submitting declarations before Wednesday’s deadline.

The five-nation bid had been expected to win the 2028 rights in an uncontested process before Russia intervened. Alongside Turkey and Italy, Russia also declared an interest in hosting the event in 2032.

Uefa reacted to the Russian declaration – which is likely to be interpreted as a provocation – by insisting that further sporting sanctions could yet be taken against the country.

Russian teams, at national and club level, are currently banned from participation in Fifa and Uefa competitions. The Russian Football Union itself, however, is not the subject of any suspension and remains an active member of both international governing bodies.

In a statement Uefa indicated that this situation could change if Russia were to proceed from a declaration of interest to submitting a formal hosting bid. A declaration of interest is the first step in a bidding process which could last another year. Uefa is set to confirm the identities of countries involved in the full bidding process on 5 April.

“The Bureau of the Fifa Council and the Uefa Executive Committee decided on 28 February to suspend all Russian teams, whether national representative teams or club teams, from participation in both Fifa and Uefa competitions until further notice,” it said. “However, no suspension of the Football Russian Union was imposed at that time.

“The Uefa Executive Committee will however remain on standby to convene further extraordinary meetings, on a regular ongoing basis where required, to reassess the legal and factual situation as it evolves and adopt further decisions as necessary, including in light of the declaration of interest expressed by the Russian Football Union for hosting the Uefa Euro.”

Russia has previously announced its intention to challenge the Uefa and Fifa suspensions at the court of arbitration for sport. Last week CAS ruled that any appeal would not be expedited to allow Russia to complete its World Cup qualifying play-off match against Poland. Poland have been given a bye to the final round where they will face the winner of the tie between the Czech Republic and Sweden.