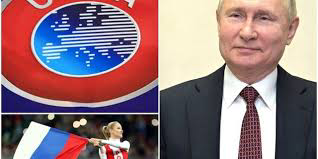 Russia raised many eyebrows when it announced it would bid to host the European soccer championships.

According to the Associated Press, the Russian Football Union (RFU) released a statement declaring its interest in hosting the 2028 and 2032 Euros.

The move comes as a surprise, as Russia has faced strong backlash in both Europe and the sports world for its ongoing invasion of Ukraine. The country’s governing body is likely to face much opposition to the bid.

Poland, Sweden, and the Czech Republic announced that they would not play FIFA World Cup qualifying matches against Russia. FIFA and UEFA later banned Russia from international competitions.

According to the AP, RFU President Aleksandr Dyukov spoke about the bid during a television broadcast. Even he did not sound optimistic about the bid’s success, and the tone of the comment even suggests the bid is an effort to annoy UEFA.

“We are sending the declaration today,” Dyukov said, per the AP. “We reserve the right to enter a bid. This option doesn’t cost anything. And you can’t refuse it, if it isn’t expensive.”

England, Ireland, Scotland, Wales, and Northern Ireland are expected to submit a bid to co-host the 2028 tournament, while Italy will bid for the 2032 event.