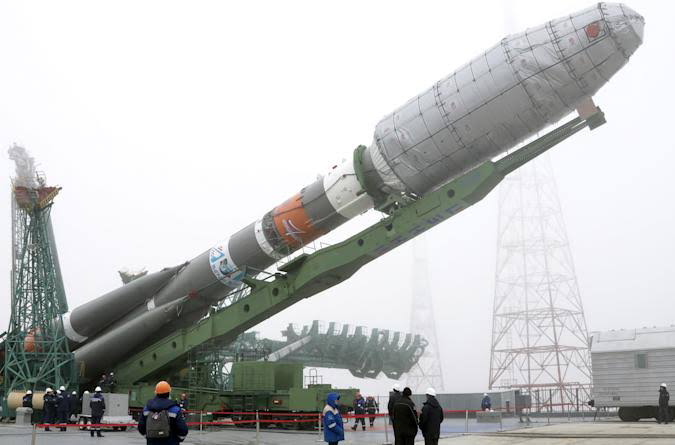 In its latest response to international sanctions and growing geopolitical tensions, Russia’s state space corporation, Roscosmos, is making a list of demands of its customer OneWeb before it agrees to launch the company’s upcoming mission this week. OneWeb’s satellites were scheduled to take off on top of a Russian Soyuz rocket on March 5th in Kazakhstan, but in light of these new demands, it seems likely that launch will not take place.

In a video posted to Twitter, the head of Roscosmos, Dmitry Rogozin, outlined in an interview that he wants assurances from OneWeb that the company’s satellites will not be used for military purposes. Roscosmos also demanded that the British government, which is a primary shareholder in OneWeb, divest its stake in the company. If these demands aren’t met, Roscosmos says it will roll back the Soyuz rocket, and the launch won’t take place as planned.ONEWEB HAS BEEN LAUNCHING ITS SATELLITES EXCLUSIVELY ON RUSSIA’S SOYUZ ROCKET

OneWeb has been launching its satellites exclusively on Russia’s Soyuz rocket for the last few years, either from French Guiana or Kazakhstan. OneWeb is building out a massive mega-constellation of low Earth orbit satellites to provide internet coverage from space, similar to SpaceX’s Starlink system. The company has been launching its satellites in batches of 34 and 36 at a time. This week’s launch was supposed to carry 36 new satellites to orbit to flesh out the constellation.

The ultimatum was a stunning move for OneWeb’s personnel, who thought the launch would still take place amid the Russian invasion. “I’ve been at this since last Thursday, taking it day by day by day,” Chris McLaughlin, chief of government, regulatory, and engagement at OneWeb, tells The Verge, “encouraged specifically by Rogozin’s tweets that they were looking forward to launching. And something changed.”

Kwasi Kwarteng, Britain’s secretary of state for business, energy, and industry strategy, tweeted that the demands will not be met. “There’s no negotiation on OneWeb: the UK Government is not selling its share,” he wrote. “We are in touch with other shareholders to discuss next steps…” In response to Kwarteng, Rogozin tweeted he’ll give the British government two days to think about it.

Roscosmos claims that delaying the launch “will cause no economic damage” because the rocket had already been built and paid for, according to Russia’s state press organization TASS. The OneWeb satellites will also remain at the launch site at the Baikonur Cosmodrome in Kazakhstan “until the situation is resolved,” the space organization claims. Roscosmos says if this rocket is not used to launch OneWeb’s satellites, then it will be used for another flight. In the meantime, it seems like OneWeb’s future working relationship with Roscosmos is in jeopardy.“IF YOU ASK ME, OUR LAUNCHES ARE SUSPENDED.”

“No other vehicles for orbiting satellites of the OneWeb orbital cluster are envisaged in the near term,” Tass writes. “The Russian side is ready to fulfill its commitments given that the foreign customer provides legal guarantees, the statement says.” OneWeb planned to launch an initial constellation of 648 satellites and had a handful of launches planned for 2022 on Soyuz rockets to flesh out the system. It has successfully launched 428 satellites so far.

McLaughlin confirms that OneWeb isn’t launching anytime soon, though. “As of now, formally, if you ask me, our launches are suspended,” he says. OneWeb’s immediate concern revolved around its staff and the staff of Arianespace, which coordinates these launches with Roscosmos, who were in Baikonur Cosmodrome. Those people are off site in Kazakhstan now, says McLaughlin, so they can come home. However, the satellites are still in Baikonur. “We would hope that they will be returned to us,” says McLaughlin, though he’s gotten no indication of that. He emphasizes that the situation is all “very new,” noting he’s been getting up-to-date information from Rogozin’s tweets.

To really emphasize how much Russia’s relationships with other nations have deteriorated, Rogozin posted a video on Twitter showing personnel at Baikonur covering up the flags of the United States, Japan, and the United Kingdom that had been painted on the nosecone of the Soyuz rocket carrying OneWeb’s satellites. Rogozin claimed that they “decided that without the flags of some countries, our rocket would look more beautiful.”