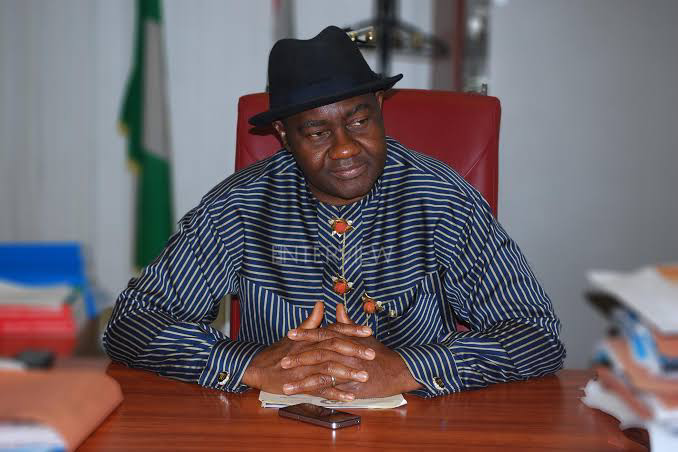 A former Senator, Magnus Ngei Abe has expressed gratitude to the people of Rivers State for their financial contributions to enable him to purchase the ‘Expression of Interest and Nomination form’ for the gubernatorial ticket on the platform of the All Progressives Congress (APC), in the state.

Speaking after picking his nomination forms, Abe said that the Rivers people are more interested in effective governance that will return power to the people, rather than politics.

He said, “I have already purchased my form to run for the primary election in our party, the All Progressives Congress (APC), and it will interest you to know that Rivers people from all across, contributed money to support me to get that form.

Rivers people from every divide, every ethnic group, every political affiliation, every religious affiliation that you can think of, Muslims, Christians, people across the State. Some put in twenty thousand Naira, some one million Naira. They brought money to help me cross that barrier.

“I think that with that kind of background, the party members across the state have realized that I’m one of their surest best to be able to cross that bridge when we actually get there.

“Secondly, let me also say that as far as I know what Rivers people are interested in at this point in time is not so much politics, but ineffective governance.

“They want a governor that will devote his time to attending to their own needs and their own challenges.

“They want a governor that understands their own problems that they face. You see like I was talking to our children the other day at the Rivers State University, when you are hungry in the school, nobody knows whether you are from Kalabari or Ogoni.

en you don’t have a job nobody knows whether you are from Ekpeye or Andoni. At that point, our problems are the same.

“When people try to promote sentiment over reality, they are trying to use those sentiments to blind you to the reality of your situation.

“We need leaders that are humble enough to understand that being a governor is just a job, you are hired by the people to do the job.

“I have the track record to enable Rivers people to believe that when I say that, that is what it will be. That’s why my candidacy is vibrating across the state not just within the APC but within the larger society, within all ethnic blocks and within groups in the state.

“I think that this is the kind of message that Rivers people want to hear, they want a governor that will concentrate on the issues of Rivers State. A governor who understands that they are the reason this country was created and the reason why Rivers State exist.

“They are the reason why the office of the governor was established in the first place and they want a governor that understands that it is all about them.

“I hate to play the ethnic card because when politicians do that, they take away from what should be the substance of the conversation, which is what our citizens, the voters are supposed to get from the political experience”.

Senator Abe recalled that since Rivers State was created in 1967, no Ogoni son or daughter has ever been a governor, deputy governor, Speaker of the Rivers State House of Assembly or the Chief Judge.