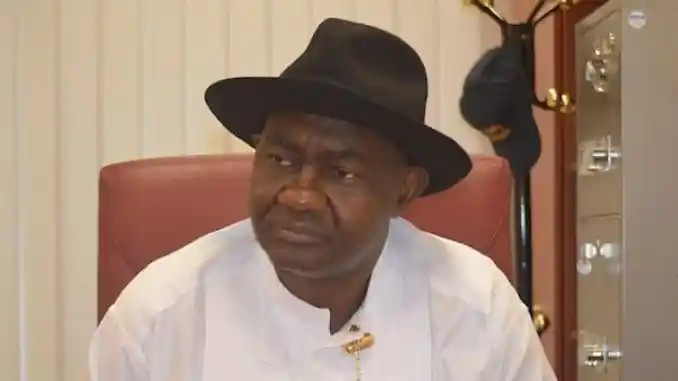 Former representative of Rivers South-East Senatorial District at the National Assembly, Senator Magnus Ngei Abe has declared his interest to contest for the governorship seat of Rivers State on the platform of the All Progressives Congress (APC), come 2023.

Abe said any cooked up plan that avoids a clean, clear and credible process in order to exclude him from clinching the governorship ticket of the APC, as well as deny the teeming members of the party in the State from choosing their preferred candidate would definitely fail.

He stressed that Transportation Minister, Chibuike Amaechi cannot anoint a candidate for the Brick house, adding that only Rivers people have the power to choose who becomes governor of the State.

Abe, who mocked a recent pact taken by governorship aspirants seeking a riverine governor, said such arrangements would not work

He said, “I heard that some people gathered to say they are gubernatorial candidates of the All Progressives Congress (APC); they have reached a pact, that it is a riverine governor and that they have agreed to whatever they said, did you see me there? Will it work? We all know that it is not going to work.

“I don’t want to say anything about them because they are my friends and they have not done anything wrong, they are following somebody who has no plan, they are going to do thanksgiving when they have not put any plan on ground in Rivers State that will help the APC to do better than it did the last time.

“It is wrong to drag God into what you are doing, when you are not doing well. When you plan, you dedicate your plan in a dedication service; it is when you win, that you should have a thanksgiving service.”

Abe vowed to resist any attempt aimed at excluding him from contesting for the governorship ticket under the platform of the APC, noting that he would support whoever emerges via a credible process.

“I have not said that Senator Magnus Abe must be the candidate of the APC in Rivers State, I have always said and will repeat, if we have a fair, free, equitable contest and somebody emerges from that process, I, Magnus Ngei Abe will support whoever emerges from such a process and the person will win.

“But if you go and cook up a process, you are cooking up to exclude me, it is not me that you are excluding, they are excluding all of you, if they exclude all of you, will they win? They will not win, so it is not rocket science.

“That is why I, Senator Magnus Ngei Abe, will contest for the gubernatorial ticket of the APC in Rivers State.

“Let me advise the party, we have been through this road many times. We should not make the same mistake again. There should be an end to political rascality in Rivers State, we should not disregard the people and expect a good result.”

Earlier, a former Attorney General and Commissioner for Justice in Rivers State, Barrister Worgu Boms, said that Abe remains the most qualified candidate for the job.