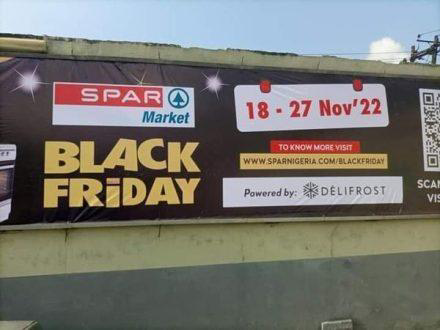 The hope of shoppers to make quick Christmas purchases at SPAR Market in Port Harcourt Mall at very low prices has been dashed.

Rivers State Government has secured an interim injunction restraining SPAR Market, the occupier of Port Harcourt Mall from going ahead with the proposed Black Friday Sales scheduled from today 18th of November to 27th of November, 2022.

Our Correspondent reports that trouble for the SPAR Market that  shares a common fence with Rivers State Government House, Port Harcourt, started when  the Rivers State Commissioner for Environment and his Directors were denied access to inspect the Health, Safety and Environment, HSE, readiness of the management and measures to prevent stampede because of the surge of customers to it’s facilities.

It was also learnt that the State Ministry Ministry of Environment had allegedly written to the SPAR management that they were coming for an inspection, but officials were not present to conduct the Commissioner and his Directors round their facility.

Trial Chief Magistrate Grade one, A.O Amadi-Nna also granted an interim order restraining the Spar Market, it’s agent servant and or Privies from further obstructing Rivers State commissioner for Environment and his staff from assessing the SPAR facilities before.

According to the order, the Commissioner for Environment and his staff are to be allowed access to the SPAR facilities for the purpose of evaluating the Environmental Health and Safety,HSE, equipment, aimed at preventing and environmental harm, likely to be cause by the Spar Market on the citizenry in Rivers State during and after the scheduled Spar Black Friday event. The matter has been adjourned till, 12th of December, 2022 for hearing.

According to the interim order secured by the State Government as  filed by the Attorney-General of Rivers State against SPAR Market, the occupier of Port Harcourt Mall, the Spar, it’s agent, servant and or Privies are restrained from conducting or holding the SPAR Black Friday Sales scheduled to told from 18th to 27th of November, 2022 pending the determination of the suit.