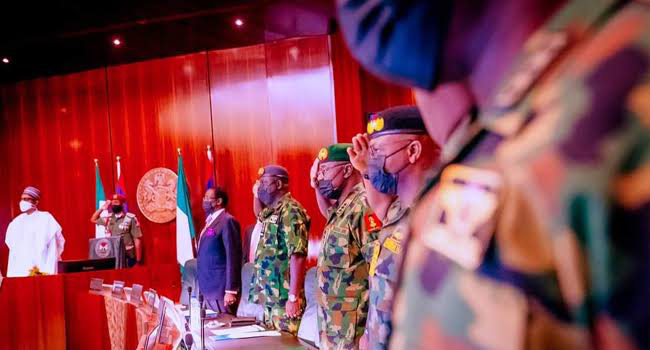 President Muhammadu Buhari has ordered security agencies to immediately rescue all captives held hostage by kidnappers and terrorists across the country.

He revealed that the president expressed displeasure and sadness over the persistent deadly activities of bandits, terrorists and kidnappers in the country.

“The President spoke about his sadness in respect of recent security challenges and developments we have had in the country, in particular the incident in which several Nigerians lost their lives with many more taken into captivity by criminals and bandits.

“Not just those that were captured during the last Kaduna –bound train incident but those that have been in captivity in other parts of the country.

“The President has directed all the operational and intelligence elements to rescue all of these innocent people immediately and unhurt. This is the basis on which other issues were discussed.

“The Chief of Defence Staff, the Service Chiefs and the Inspector-General of Police (IGP) all briefed the President on occurrences in their respective organisations.”

He disclosed that he made some recommendations on how best to tackle the security challenges confronting the nation.

“I submitted a memo to Council and my recommendations are being looked into by the President.

“My recommendations are wide-ranging and they touch on all aspects of security, starting with the level of security of our land borders as well as within the country itself,’’ he said.

According to Monguno, decisive steps are being taken to secure all the land borders of the country, in order to address security threats emanating from the affected border areas.

He said the threats had now shifted from the North-Eastern part of the country to the North-West and North-Central, but that must be contained.

“It has to be contained collectively by both the Armed Forces and constabulary forces but the intelligence agencies have also been directed to enhance the acquisition of intelligence,” he added.

The IGP,. Mr Usman Alkali, who also fielded questions from the correspondents on the outcome of the meeting, assured Nigerians that the issue of security would be well-coordinated across the country before, during and after the forthcoming gubernatorial elections in Osun and Ekiti as well as the 2023 general elections.

“All the service chiefs and heads of security agencies and members of the inter-agency consultative forum on elections, are studying the situation.

“We are hopeful and we believe the narrative will change for the better in terms of securing the country to enable us to conduct both the staggered and general elections,” he assured.