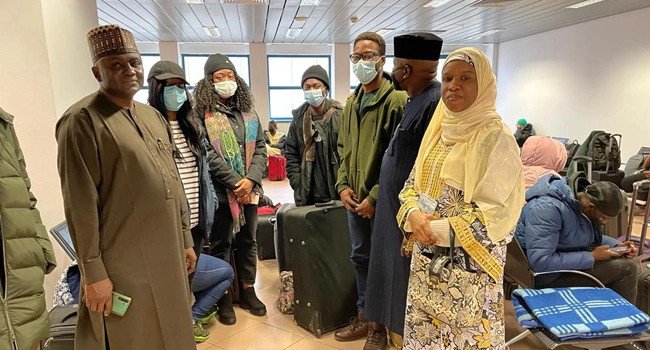 A delegation from the House of Representatives has landed Romania to begin oversight and assist in the evacuation of Nigerians from Ukraine following Russia’s invasion of the Eastern European nation.

The group is led by the House Leader, Alhassan Ado-Doguwa, a statement from the Special Adviser on Media and Public Affairs to the Chairman, House Committee on Foreign Affairs, Nkem Anyata-Lafia, added.

“The lawmakers, who departed the country yesterday after very close monitoring of the degenerating situation in the last few days through which they maintained close contacts with officials of the Ministry of Foreign Affairs, the Nigerian Missions in Ukraine, Bucharest, Budapest, Warsaw, and other regional neighbouring countries to Ukraine, as well as the fleeing Nigerian nationals, were received on arrival by officials of the Nigerian Missions in the area,” the statement said.

“The delegation was subsequently led to meet with Nigerian evacuees who were already at the airport awaiting the first flight that would leave for Nigeria.”

During their interaction with the Nigerians, who are mostly students, the delegation conveyed the House’s goodwill and expressed confidence that the conflict will end soon.

Their arrival followed a resolution by the House during plenary last week with the Speaker Femi Gbajabiamila mandating Ado-Doguwa and the Chairman, House Committee on Foreign Affairs, Yusuf Buba Yakub, to visit Ukraine and ensure Nigerians who want to return home are supported.

Already, more than 2, 000 Nigerians have been received by Nigerian missions in countries like Slovakia, Romania, Poland, and Hungary. The first batch of evacuees is expected to land the country later in the day.

Officials at the Ministry of Foreign Affairs put the number of Nigerians in Ukraine at about five thousand six hundred.