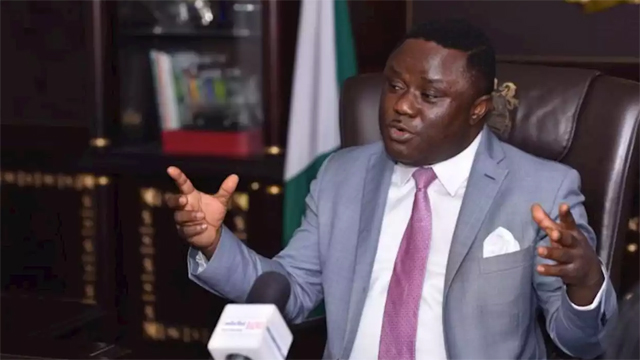 Gov. Ben Ayade of Cross River has told Civil Servants in the state that relying solely on their salaries is no longer fashionable because it is hardly enough.

Ayade disclosed this in Calabar at the flag-off ceremony of the first phase of the 2022 improved cocoa seedlings farming in the state.

Represented by Dr Oscar Ofuka, Special Adviser to the Governor on Cocoa Development and Control, Ayade urged workers to go into farming, especially cocoa farming.
According to him, if Cote d’ivoire with a smaller landmass could become a leading cocoa producer, Nigeria can do better.
“If Cross River decides to Channel all its energy in cocoa cultivation, it would surpass the stride made by Cote d’ivoire in cocoa production.

“We have created an enabling environment for the people of the state to create wealth through agriculture.

“I advise workers in the state to fully go into cocoa production so as to better their lots after retirement, as cocoa is one of the crops that can grow even on rocks.

“With the kind of fertile rainforest that Cross River is endowed with, people can go into cocoa production to turn around their fortunes rather than depend on their salaries that may not be sustainable,” he said.

In his remarks, Mr Timothy Akwaji, Cross River Head of Service (HOS), stated that with agriculture, a lot that could hardly be archived while in service could still be archived.

Akwaji maintained that agriculture is one of the professions that the civil service rule does not forbid when in service, stressing that even as a civil servant, he owned a palm farm that generated income into his family coffers.

“As civil servants in the state, do not only rely solely on your salaries but go into cocoa cultivation and other agribusinesses that can bring about value addition to the economy of your families,” he said