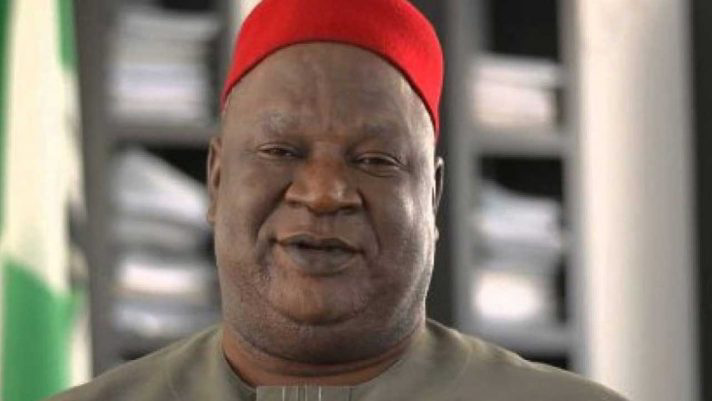 Sen. Anyim Pius Anyim, a presidential aspirant on Wednesday in Abuja, urged Nigerians to recall him if after one year in office he failed to perform.

Anyim, who intends to contest on the platform of the People’s Democratic Party (PDP), said this while making a presentation to the party’s National Working Committee (NEC) after submitting his nomination form to contest for president.

According to him, his vision is to build a Nigeria everyone will be proud of as he has the experience to make it happen having served as a senate president and as Secretary to the Government of the Federation.

“The only request I am placing on the table today is that if you give me the ticket of PDP to fly the flag of this party for the general election of 2023, I will go ahead to win the election.

“I will return to government as president of Nigeria and if I run this country for one year, and you don’t see the difference between light and darkness, you can recall me.

“From the vantage positions I have held, I understand the challenges confronting our nation today and I have clarity of what the solutions could be.

“The purpose of my being here today is to present to you my informed pathway to rebuilding and refocusing our country on the part of growth, peace, and prosperity.

“I shall outline my understanding of the problems and my evidence-informed pathway to resolving them under three broad categorizations of political, economic, and social integration.’’

Anyim said that politically, his administration would consider consensus on the structure of Nigeria, governance system and National ideals or aspirations.

This, he said was because the absence of consensus on these areas accounted for the disunity and mutual suspicion that was threatening the nation presently.

He said that as part of our political consolidation process, a platform would be provided for broad-based consultations and frank dialogue on a generally acceptable new foundation for Nigeria.

Anyim said that machinery would be put in place to harvest the views and secure the buy-in of all components of the polity and build consensus on the structure of the federation.

He said it would also include an acceptable governance system and benchmark agreed national aspiration to which all shall commit as consensus-building would be the hallmark of his administration.

Anyim said that a visionary leadership style would be deployed to respond to the aspirations of the people, thereby, ensuring unity of purpose, patriotism inspired, and commitment to building the dream of Nigeria.

He said that industralisation would be encouraged to drastically reduce importation, improve local production and strengthen the naira among others.

Anyim promised to promote Micro, Small, and Medium Enterprises (MSMEs) and review Nigeria Industrial Revolution Plan (NIPR) to make it fit for its purpose and ensure it aligns with our growth ambition.

He added that talent and innovations would be the flagship of the knowledge-based component of the economic agenda by targeting to unleash the creativity of the young population.

Anyim said that Nigeria’s mode and factors of production would be repositioned through science and technology to fit into the fourth industrial revolution in all sectors.

He said that presently, the nation was under security and separationist challenges but his government would evolve national integration policies by running inclusive governance that reflected the Federal Character.

The aspirant said he would promote equality of all citizens before the law and protect the independence of the judiciary, adding that strong institutions would be built to promote and protect the sanctity of lives.

He said that women, youth, and diaspora Nigerians would be adequately mainstreamed into the national development.

According to him, discrimination on the basis of ethnicity, and religion will be eliminated and citizens will play active roles in policy formulation while upholding the rule of law.

Anyim said that he would abide by the decision of the party on zoning.

“At any time any of these ‘certainties’ is no longer guaranteed, democracy will corrupt justice and enthrone inequity.

“Accordingly, my appeal is that zoning is a fundamental principle of our party should not be jettisoned.

“Democracy, being a system of rules and order, depends on strong institutions for its sustenance and success. When a system can no longer defend its rules, it will enthrone the reign of might as against the rule of law.

`My appeal is that PDP should defend Section 7 (3) (c) of its constitution,’’ he said

In his remarks, the PDP National Chairman, Sen. Iyorchia Ayu, said that as at Wednesday afternoon, 17 aspirants comprising 16 males and one female had obtained PDP nomination and expression of interest forms.

Ayu said that this showed the strength and popularity of the PDP as well as its acceptance among Nigerians ahead of the 2023 general elections.

He assured all the aspirants that the NWC would be transparent and neutral as an umpire, adding that the decision of who would emerge as flag bearer would be determined by ordinary members of the party.

Ayu enjoined all aspirants to work together for PDP to emerge victorious in 2023.

He expressed confidence in the capacity of Ayim to lead Nigeria haven worked as a civil servant, senator, Senate President and later Secretary to the Government of the Federation, adding that the party was lucky to have him.https://0ed6fd3db65b3f0e3d9cedf90c8cf23b.safeframe.googlesyndication.com/safeframe/1-0-38/html/container.html

Mrs Nkoli Mkparu, the Coordinator-General, United for Better Nigeria Initiative (UBNI), said that the group in collaboration with its partners bought the presidential form for Anyim because they believed in his ability to deliver.

“Anyim is the greatest gift given to Nigeria, who Nigerians need at this crucial time because Nigeria is a special country that requires somebody with ability, consistency, stability, humility and the right temperament to manage the nation.

“Right now, the security aspect of Nigeria is very crucial, so we believe that somebody like his excellency will unify the country, provide jobs for youths who are believed to be causing the problems because of restlessness and joblessness.

“His excellency is very futuristic and has the wisdom to create new jobs for our youths so that we can come together and embrace our country, Nigeria can lead the world with someone like his excellency.’’