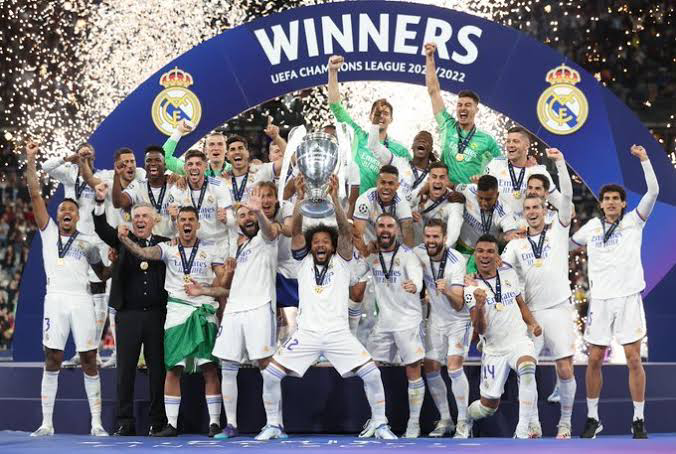 Real Madrid are again champions of Europe after beating Liverpool 1-0 in Paris at the Stade de France.

Brazilian forward Vinicius Jr scored the only goal of the game for Los Blancos, against a Liverpool side who created chances, but found Thibaut Courtois at his obdurate best between the sticks for the Spanish giants. The Belgian made a number of outstanding saves, not least turning a first-half Sadio Mane strike onto the post.

Carlo Ancelotti made history by winning his fourth Champions League crown as a manager, more than any other manager in the history of the competition and its predecessor, the European Cup. For a number of his veteran players, including Karim Benzema, Luka Modric and Marcelo, it marked a fifth triumph in the competition.

Courtois said on BT Sport: “I said to my friends yesterday that when Real Madrid play finals they win it. I am on the good side of history. Today I needed to win a final for my career, for all the hard work to put respect on my name because I don’t think I have enough respect, especially in England.”

Courtois, who won two Premier League titles, the FA Cup and League Cup with Chelsea, added: “I saw a lot of criticism even after a great season, that I was not good enough or whatever.

“I am just really happy and proud of the performance of the team. We stuck to it and when I needed to be there, I was there for the team.

“I think we beat the best clubs in the world; (Manchester) City and Liverpool were unbelievable this season. They fought to the end in the Premier League and Liverpool won two cups. Today they were really strong.

“I played a great game, that was the difference today because we had one important chance and we scored it.”

The final was itself delayed by 36 minutes amid chaotic scenes outside the Stade de France. Liverpool supporters outside the ground said locals were taunting riot police, causing gates to be shut off and causing two-hour long delays for fans trying to enter the stadium.

One fan said: “This will be pinned on us, but it’s nothing to do with us. There’s hundreds here causing trouble, they’re not even for the game – it’s chaos.”

Hundreds of armed French police officers with shields, tear gas and barriers could be seen running around outside the Stade de France. Large groups of fans, many with tickets for the game, continued to wait outside the stadium.

One fan, Carl Noades, 63, told the Press Association “There only seems to be one gate open, it’s ridiculous, the game’s kicked off and we’re stuck outside. It’s a disgrace, the way they’re treating us is shocking, there no organisation.”

France’s national stadium had stepped in to host the showpiece after St Petersburg was stripped of the final in the wake of Russia ’s invasion of Ukraine, but there seemed a distinct lack of organisation around this occasion – with Liverpool’s team bus even notably arriving late to the ground.

UEFA announced the game had been delayed due to “the late arrival of fans at the stadium”, before changing their mind and declaring it was due to “security reasons” shortly after. But, as they did so, gates at some of the entrances remained locked, with fans carrying tickets who had been queuing for hours still unable to enter the premises.

Fans were seen up against the fence shouting at people to sort the situation out and let them in. Riot police were in attendance with tear gas being used.

Kelly Cates – the daughter of Liverpool great Sir Kenny Dalglish – posted: “Absolutely shambolic at the Stade de France. No way in, no way of knowing which way to go. Stay safe if you’re heading in. It has the potential to be very dangerous.”

While the game was still going on, Liverpool issued a statement declaring themselves “hugely disappointed” with events ahead of the final and demanding a formal investigation.

A club statement read: “We are hugely disappointed at the stadium entry issues and breakdown of the security perimeter that Liverpool fans faced this evening at Stade de France.

“This is the greatest match in European football and supporters should not have to experience the scenes we have witnessed tonight. We have officially requested a formal investigation into the causes of these unacceptable issues.”

The UEFA statement read: “In the lead-up to the game, the turnstiles at the Liverpool end became blocked by thousands fans who had purchased fake tickets which did not work in the turnstiles. This created a build-up of fans trying to get in. As a result, the kick off was delayed by 35 minutes to allow as many fans as possible with genuine tickets to gain access.

“As numbers outside the stadium continued to build up after kick off, the police dispersed them with tear gas and forced them away from the stadium. UEFA is sympathetic to those affected by these events and will further review these matters urgently together with the French police and authorities, and with the French Football Federation.