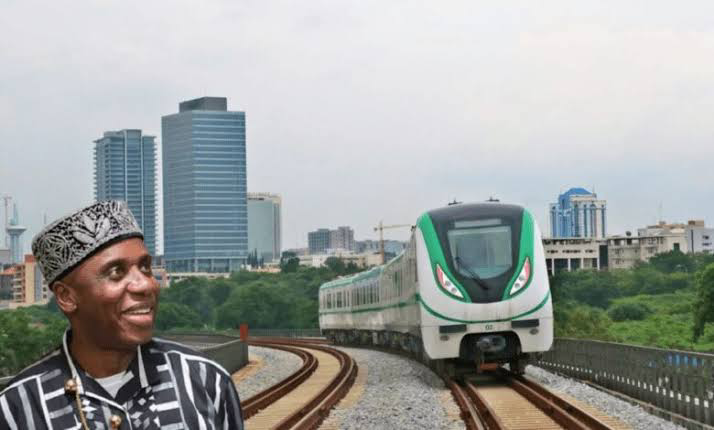 Minister of Transportation, Rotimi Amaechi, on Thursday, said Nigerians should be grateful to President Muhammadu over the “massive” railway projects across the country.

Ameachi said this on Thursday in Abeokuta, Ogun State, during the launch of the State Mass Bus Transit System.

He said Buhari, in spite of criticisms of the huge borrowing, has been constructing railways since his administration came on board in 2015.

According to him, Buhari’s tenacity deserves commendation for him to do more.

The Minister explained that the construction of Lagos-Calabar rail line that would pass through Lekki Deep Seaport down to Epe township would be completed and commissioned by September.

He emphasised that the Federal Government has continued to implement the rail line master plan project initiated by the President Olusegun Obasanjo regime.

Ameachi said, “What you (Nigerians) owe us is not only gratitude, I know you won’t, some of you, but most of you will, if you are APC (members), what you owe us is the gratitude of the tenacity of the President, who despite the criticism of borrowing money is continuing to construct the railway, that is what you owe us. Because the moment you say to a man you are doing well, he will do more.

“In Fact he approved that we should redirect the initial design of the railway from Lagos through Apapa to Epe to Lekki deep sea port so that we don’t have a logjam as we have now in Apapa at the Lekki deep sea port which will conclude construction by September and then commission it in September.

“And I hope that when we leave, whoever, I know APC will win again, whoever is the President should continue from where we stopped.”

The former Rivers State Governor applauded Governor Dapo Abiodun for operating a “purposeful government,” saying all the legacy projects carried out by the governor would continue to speak for him after leaving office.

The official launch of the buses fitted with Wifi and other gadgets, the governor observed, was in line with the transport master plan aimed at providing efficient and affordable means of moving people from one location to another.

Abiodun also disclosed that a Memorandum of Understanding (MoU) would soon be signed between the state and a private firm for the construction of the Olokola Seaport.

“It is important to know that the whole essence of the transportation master plan is for us to efficiently move people either intra-state or inter-state. We are the industrial capital of this country and neighbour to the biggest economy which is Lagos State. We see the cross border migration everyday and the trouble our people go through.

“Our transportation master plan has proffered suggestions and solutions for us to deal with this. Today, we are launching these mass transit buses. The pilot phase will start from Abeokuta and we will expand it to other cities”, the governor noted.

He said his administration is also developing a Bus Rapid Transit (BRT) lanes in conjunction with the Lagos State government under the Lagos-Ogun Joint Development Cooperation, adding that the State buses would move people from Abeokuta through Mowe, Kara axis to Marina as well as from Ifo and Ado Odo-Ota axis to Lagos and vice versa.