Queen Elizabeth Celebrates Her 96th Birthday with Her Most Majestic Photo Ever! 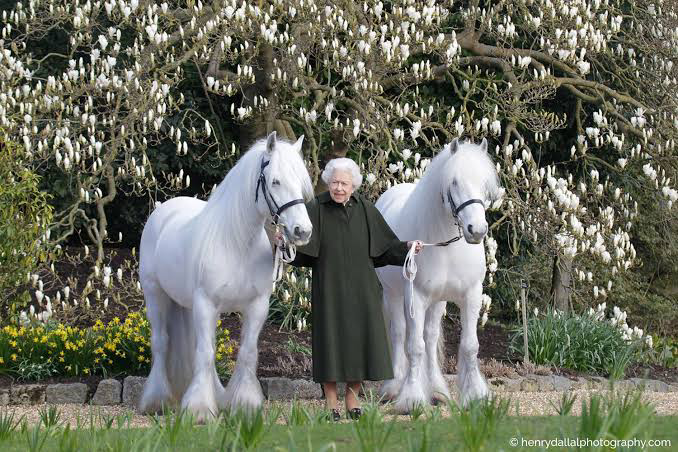 Queen Elizabeth is taking 96 by the reins!In honor of the Queen’s birthday on Thursday, a new portrait of the monarch was released by the Royal Windsor Horse Show on Wednesday evening.

The majestic shot, which was taken last month on the grounds of Windsor Castle, shows the Queen standing proudly between her fell ponies, Bybeck Katie and Bybeck Nightingale. She wears a dark green cape-style coat as she holds the reins of two of her favorite ponies in front of a magnolia tree.

Queen Elizabeth will mark her 96th birthday in a place full of reminders of her late husband Prince Philip, who died last April at the age of 99.

On Wednesday, the monarch traveled from Windsor Castle to her Sandringham estate in Norfolk, about 110 miles north of London, Buckingham Palace confirmed.

The palace told PEOPLE that the Queen will be spending her birthday privately.

Throughout her life, Queen Elizabeth has always had a fondness for horses and was given her first horse (a Shetland pony) when she was just 4 years old. She’s also been known to get animated at horse racing events, enthusiastically cheering for her horses.

However, she reportedly hasn’t ridden since early September. “She was in quite a bit of discomfort,” a source told The Sun in October. “She adores riding, and it has been part of her ritual for most of her life. She has been extremely disappointed not to go riding since the beginning of September.”

Her love of horseback riding has also been passed on to the next generations of royals as well. The Queen’s daughter, Princess Anne, became the first British royal to compete in the Olympics when she rode in the equestrian three-day event at the 1976 Games in Montreal. Following in her footsteps, Anne’s daughter, Zara Tindall, competed in the 2012 Olympics and won a silver medal as a member of the Great Britain Eventing Team.