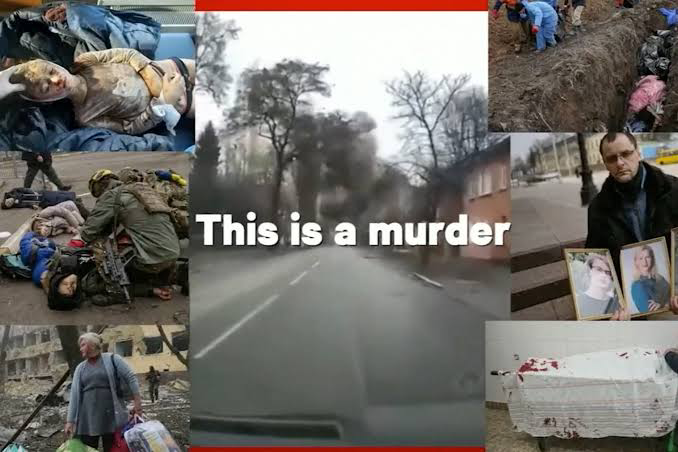 During his virtual address to members of Congress on Wednesday, Ukrainian President Volodymyr Zelensky asked U.S. lawmakers to watch a graphic video showing Ukrainian cities before and after Russia’s deadly military invasion.

“I ask you to watch one video, a video of what the Russian troops did in our country,” Zelensky said.“We have to stop it, we must prevent it, prevent or destroy every single aggressor who seeks to subjugate other nations. Please watch the video.”

The two-minute video began with a montage of peaceful scenes of children playing in Kyiv, Kharkiv, Odesa, Kherson and other cities before pivoting to missile strikes on residential areas.

The clip then oscillated between before-and-after images showing the destruction left by Russia’s assault. First responders trying to save bombing victims. Women and children crying. Bodies strewn across the pavement. Bodies dumped into a trench that served as a makeshift gravesite.

In the middle of the tragic montage, a message was displayed on the screen. “This is a murder,” it read

Zelensky spoke to Congress from Kyiv on Wednesday, telling U.S. lawmakers Russia has gone on a “brutal offensive against our values” and has “turned the Ukrainian sky into a source of death for thousands of people.” He urged the United States to create a no-fly zone over Ukraine, saying, “Is this too much to ask? Close the sky over Ukraine.”

Zelensky compared the situation in Ukraine to Pearl Harbor and the Sept. 11 terrorist attacks. “Our country experienced the same every day,” he said. He also referenced Martin Luther King Jr.’s “I Have a Dream” speech by telling Congress, “I have a need. I need to protect our sky.”

Near the end of his address, Zelensky showed an emotional video beginning with footage of Ukraine prior to the invasion and then compiling graphic footage of Russian attacks and civilians who have been killed. “We have to stop it,” Zelensky said. “We must prevent it.”

Zelensky ended his speech by speaking in English and addressing President Biden directly.

The Ukrainian president concluded his remarks by saying: “Glory to Ukraine.” He received a bipartisan standing ovation from Congress.