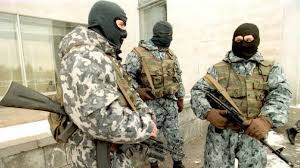 President Vladimir Putin and the Kremlin are reportedly sending execution squads after their own army with orders to kill Russians who try to flee.

Ukraine security services claim that prisoners of war have told them of the horrific plans that has reportedly seen Russian guns aimed at their own.

The ‘execution squads’ are a revival of Stalin’s World War Two tactics and are another sign of dire morale among Moscow’s troops, The Mail Online reports.

There have also been reports of Chechen units being sent in to try and stop Russian deserters.

Since the Russian invasion began on February 24, Kyiv has released videos of Russian captives who were saying on camera how they chose to quit rather than keep fighting.

Ukraine has sought to take advantage of poor Russian morale throughout the invasion and is waging a propaganda war of its own to promote success stories.

They have bombarded Russian phone numbers with texts instructing them how to surrender, and reportedly a few days ago a tank commander replied positively.

Victor Andrusiv, an adviser to the minister of internal affairs, said: “He didn’t see the point of war”.

A meet up was agreed and the tank commander was taken away after all the other troops in the tank had already fled back to Russia.

Mr. Andrusiv added: “He could not return home because his commander told him he would shoot him dead and say he died in battle.

“Misha told us that he had barely any food left, the command structure was chaotic and almost absent, morale is very low.”

Mr. Andrusiv made the claims yesterday on social media, as a part of the ongoing communications war between the two sides.

He said the defector would be given $10,000, a TV, phone, kitchen, and shower to spend the rest of the war with.

This follows growing claims that Russia’s forces are being hamstrung by desertions, with many of its troops’ conscripts.

Denys Monastyrsky, the minister for internal affairs, said: “We are seeing cases of surrender when Russian troops voluntarily contact our military and declare that they want to surrender, that they do not take part in active hostilities.”

He claimed that many realised they were being used as “cannon fodder” by their commanders.

The Centre for Defence Strategies, a leading Ukraine think-tank echoed this, saying: ”Russian forces are aware of the hopelessness of their situation and increasingly choosing desertion to avoid death”.

Ukraine also claimed that two days ago they saw a sharp rise in defections in the southern Kherson and Mykolaiv regions.

The Ukrainian Ministry of Defence ’s intelligence agency said: “Having seen the real strength of the Ukrainian defenders, the occupiers are no longer interested in easy money and the possibility of looting, which they were promised before the invasion.”

Other reports of intercepted messages from demoralised Russian soldiers have revealed them talking about officers who shot themselves in the leg to get home.