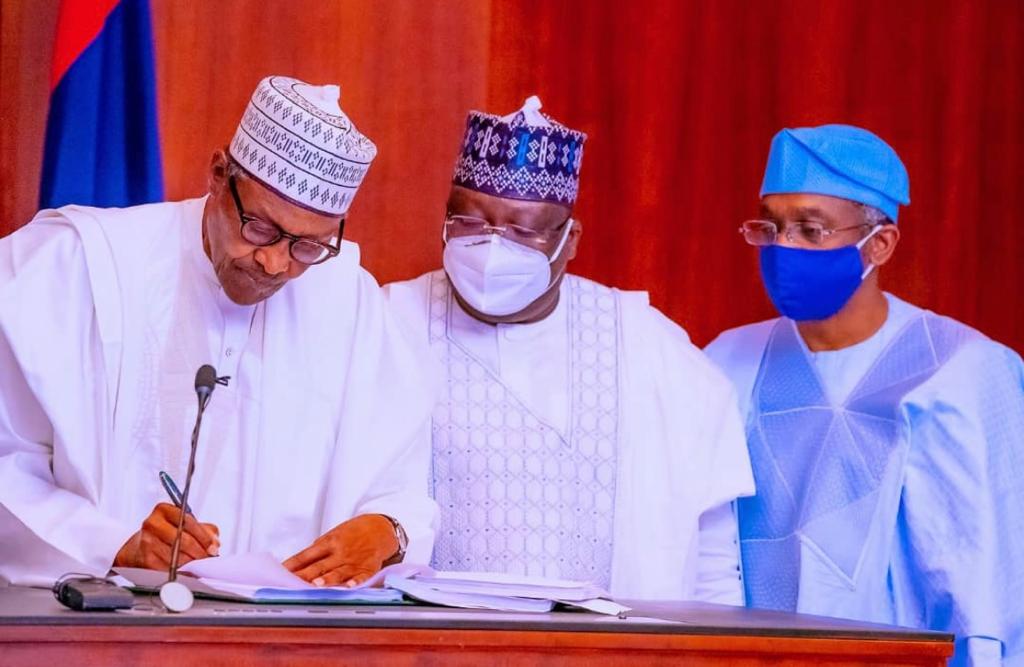 The President assented to the bill at past midday on Friday at a brief ceremony held at the Council Chamber of the Aso Villa in Abuja.

The President of the Senate, Ahmed Lawan, and Speaker of the House of Representatives, Femi Gbajabiamila, witnessed the signing of the bill.

Members of the President’s cabinet in attendance included his Chief of Staff, Professor Ibrahim Gambari, and Secretary to the Government of the Federation (SGF), Boss Mustapha, among others.

This comes barely a week to the expiration of the window the President has to take a decision on the proposed legislation, as required by the Nigerian Constitution.

Having received the bill from the National Assembly on January 31, various stakeholders including political actors and civil society groups had awaited its signing into law by the Nigerian leader.

Amid an outcry over the delay in signing the bill into law, sources had indicated that President Buhari was billed to give his assent on Wednesday.

But the signing of the bill failed to take place as scheduled and was rescheduled to Friday, although sources said the President would honour the new date.

But lawmakers in the 9th National Assembly successfully amended the act, although they also had an initial setback.

President Buhari had withheld his assent to the bill in November 2021, citing the cost of conducting direct primary elections, security challenges, and possible manipulation of electoral processes by political players as part of the reasons for his decision.

He later gave some conditions to give his assent – an action that prompted the lawmakers to re-work the bill, leading to the emergence of two versions in the Senate and House of Representatives chambers.

Both chambers later passed the harmonised version on January 25 – the final agreed version of the amendment to Clause 84 which included the direct, indirect, and consensus primary modes.

The harmonised version was received by President Buhari a week later, as confirmed by his Senior Special Assistant on NASS Matters (Senate), Senator Babajide Omoworare.