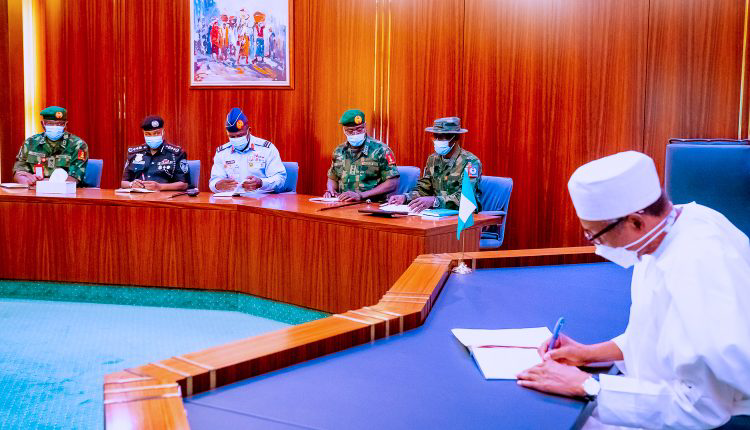 The Service Chief, who had earlier visited the scene of the attack on a train in Kaduna, arrived at the Presidential Villa around 14:55 GMT.

They briefed the President on their on the spot assessment of the unfortunate incident that happened on Monday night.

“We have come to brief the President regarding the unfortunate incident of yesterday, where some criminals, bandits had gone to lay improvised explosive devices on the rail tracks and a passenger train was demobilised and seven Nigerians  were killed, 29 others wounded and some were kidnapped and we are yet to establish the exact number.
“So we went to the scene this morning, inspected the entire area and gave out instructions on what is to be done and we have come to brief the President on this development.”

The Defence Chief said security agencies would build on the lessons they have learnt from the latest incident.

He assured Nigerians that the military and other security agencies would not rest on their oars until everywhere is secured.

“The challenge of insecurity is a constant one and so the defence and security agencies need to be on their toes 24/7. This is unfortunate and we believe that the lessons out of this are what we need to build upon going forward.
“I can perhaps use this opportunity and reassure the nation  that based on the President’s directive, we will take every necessary action, not just to apprehend those behind this dastardly act, but for them to also face justice.
“Going forward, certainly there will be greater security for the nation and I will like to urge everybody to go about their normal duties,” he said