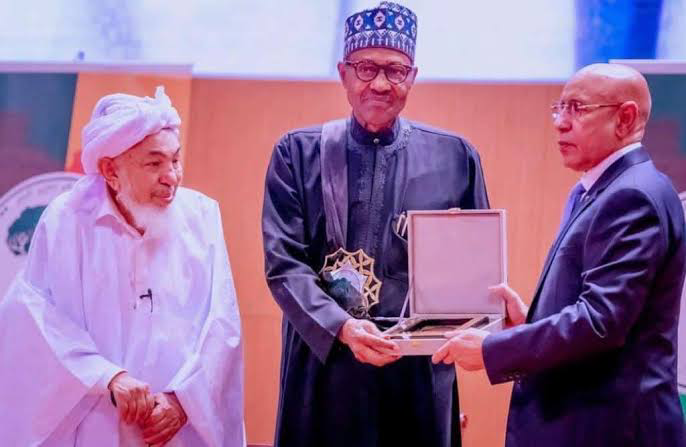 President Muhammadu Buhari has urged leaders to place a premium on youth development, with more seriousness and actionable ideas in promoting skills acquisition, while discouraging idleness.

Speaking on Tuesday in Mauritania at the African Conference for Peace, 2023, the President said the idleness of youths and non-inclusion in discussing issues that shape their lives and the future portends liability for the continent, especially in religious fundamentalism and extremism.

The President, who was honoured by the Abu Dhabi Peace Forum with the “Award for Strengthening Peace in Africa”, said there was a need to inculcate values and principles of tolerance and peace in educational institutions, and particularly, among the youths.

“There is a need also for African stakeholders, that is, the government, private sector, and the Civil Society Organisations, to make concerted efforts to support existing mechanisms and initiatives to build strong and virile institutions that effectively support good governance which, inter alia, lead to the development and progress of our countries and continent.

“African leaders must reaffirm their commitment by demonstrating the political will required for ownership of African Peace and Security Architecture and in the implementation of African Governance Architecture.

“We must also adjust the effectiveness of the early warning system and conflict prevention and adopt policies aimed at resolving the crisis of de-radicalisation through continuous dialogues and negotiations,’’ he said.

President Buhari noted that efforts must be concertised toward the curtailment and possible prevention of the circulation of Small Arms and Light Weapons, as well as the festering of foreign fighters into the African continent.

The President called for the imperatives of the next Summit of the African Union to take a holistic review of the challenges that continue to fester in Libya with the hope of finding a pragmatic African approach to resolving the over-a-decade-old instability in Libya that had made that country a safe-haven for all kinds of weapons and foreign fighters whose profound impacts stare all in the sub-regions and Africa.

“Your Excellencies, Distinguished Ladies & Gentlemen, global terrorism, banditry and other transnational crimes continue to pose enormous challenges not only to Africa but to global peace and security. These phenomena have become perennial threats to sustained economic development and growth.

“Nigeria and other regional bodies in Africa and the rest of the world are working assiduously to deal with these existential threats to the very existence of humanity. In Nigeria, we continue to engage bilaterally and multilaterally to comprehensively win the war against the Boko Haram insurgency and other related terror groups through kinetic and non-kinetic approaches.

“When I assumed power in 2015, Boko Haram held about two-thirds of Borno State, half of Yobe State, and a couple of Local Government Areas in Adamawa State, all in the North-East of Nigeria. We have been able to retrieve these swathes of territories by investing over 1 billion dollars to acquire hard and software weaponry from the US and other friendly countries to carry out sustained operations against insurgency since 2015.

“Our Armed Forces and those of our partners in the Multinational Joint Task Force (consisting of Chad, Niger, Cameroon, Benin Republic and Nigeria) continue to demonstrate great bravery while paying the ultimate price in securing our collective freedom. Despite the difficult times we face, we continue to spend very scarce and lean resources to ensure that we have a well-resourced military force to take on this task. Ideally, these are resources that could be spent on Education, Healthcare, infrastructure and other social services, but without peace, we have learned the hard way that our children cannot go to school or seek good healthcare,” the President stated.

President Buhari told the assembly of African leaders that the shrinking of Lake Chad had resulted in dire consequences of the people of the region losing their traditional source of living which culminated in the youths being recruited by the terrorist groups who were seeking means of livelihood occasioned by difficult economic conditions.

He explained that the scenario created serious instability and served as a litmus test for member countries of the Lake Chad Basin Commission (LCBC) in devising means to restore the livelihoods within the region.

“As a corollary to containing this development, the Lake Chad Basin Commission (LCBC) has begun implementing programmes to safeguard the ecosystem of the basin, including seeking global support to return the lake to an economic hub it was known for in the past.

“Although, we are winning the war, however, as a country and sub-region, we continue to be negatively impacted by events in Libya, the Central Africa Republic, The Sahel and the war in Ukraine. Our region is awash with all sorts of small and light weapons that continue to be free in circulation, orchestrated by the impact of foreign fighters.

“We must therefore, support peace initiatives to bring political stability in crisis-ridden areas such as Libya, Central African Republic and other parts of the Sahel region to discourage the spread of insurgency, other criminal groups, as well as arms and foreign fighters in these locations and continent-wide,” he stated.

President Buhari noted that it was imperative for the African countries, through the African Union, to renew initiatives for finding African Solutions to the challenges of Libya that have continued to remain volatile, hoisting not only lack of peace and stability in that country, but development in the Sahel, Central and West Africa as well as the Lake Chad Regions.

“Too many external interests have pestered on the challenges of Libya for too long and regrettably compounded the search for sustainable resolution. This has left our sub-regions far more fragile and a haven for all negative influences to regenerate which have ultimately remained threats to peace, stability, development and progress of our regions and the rest of Africa.

“I hope that the next African Union Summit next month, would revisit this matter, comprehensively and pragmatically, to free our regions and continent, the cycles of violence, instability, lack of development and progress in the sub-regions of Africa that are well-endowed with resources that can easily sustain not only the continent but most of the world.

“I hope that President Macky Sall, as President of the African Union, would take up this challenge at the continent’s next Summit, to refocus our attention, to finding indigenous sustainable solutions to Libya as indeed the entire Peace and Stability Architecture of our continent.

“To conclude my address, I wish to align myself with the Declarations reached at the two previous series of the Conference,” he said.

President Buhari thanked the Abu Dhabi Forum for Peace under the tutelage and sterling leadership of Shaykh Abdallah Bin Bayyah, for the honour of nominating him as the recipient of the “African Award for Strengthening the Peace”.

“It is indeed a recognition that speaks volumes to the ultimate goal of collective efforts by African leaders to engender peace and stability as prerequisites for development in our continent.

“This event is taking place amidst growing armed conflicts, exacerbated by extremists’ ideology rooted in the misinterpretation of religious precepts, and of course widespread deprivations of the citizens of Africa and other parts of the world.

“These sad developments have, for many decades, become worrisome that they preoccupy all governments and well-meaning organizations, as well as individuals in Sub-Saharan Africa and beyond.

“Realizing the danger posed by the growing insecurity to the progress African countries have achieved in their political and socio-economic advancement since gaining independence from their colonial masters, it is commendable that the Government of Mauritania, in collaboration with the Abu Dhabi Forum for Peace, launched the First edition of the Conference in 2020, where the inaugural Conference deliberated on: “The Role of Islam in Africa: Tolerance and Moderation Against Extremism and Sectarianism”.

“The theme of the Third edition of the Peace Conference: “Enter all in Peace” still corroborates the lingering scourge of insecurity, with linkages within and outside of the region, thereby necessitating the imperative for continued concerted engagements with governments and international partners towards its amelioration, if not outright eradication,” the President told the leaders.

President Buhari paid tribute to the relentless drive and courage of His Excellency Sheikh Abdallah Bin Bayyah, for his initiative to promote peace through the process of combating extremists’ ideas that incubate violence in societies.

“Your scholarly teachings should be given due dissemination to counter the terrorists’ narrative misrepresenting Islamic thoughts,” he said.

President Buhari stated that it was his strong belief that if leaders were able to re-commit themselves in the right directions with our strong political will, Africa would be better for it.

President Buhari appreciated President El-Ghazouni and the Government and people of Mauritania for hosting the peace conference.

In his remarks, the President of the Forum for Promoting Peace in Muslim Societies, Shaykh Abdallah Bin Bayyah, said the 2023 conference theme was based on the recommendations of the “Nouakchott Declaration” that emerged from the inaugural conference.

The declaration, which aims to deconstruct the religious basis of extremist speeches and to limit violence based on religious arguments, was enshrined as a reference document in the African Vision for Peace at the 33rd Summit of Heads of State of the African Union.

Bin Bayyah said the 2023 conference aims to strengthen the implementation of the Nouakchott Declaration and grow its popularization.

“We want to raise awareness among African elites, spiritual elites and the youth, of the absolute priority that must be given to peace, and the need to implement concrete actions to promote and entrench it,” Bin Bayyah noted. “The promotion of peace is the only possible way to guarantee access to prosperity and economic and social development.”

He said that women would be specifically included during the three days of reflection, debate and development of concrete peace-building initiatives.

He said the award was given to President Buhari for providing good leadership and promoting peace in a multi-ethnic, multicultural and multi-linguistic country like Nigeria, and extending his experience and wisdom to other African countries.

The African Conference for Peace 2023 aims to strengthen the implementation of the 2022 Nouakchott Declaration by continuing to address the issues of conflict, misused concepts of Jihad, illegal immigration, girls’ education, and the promotion of peace and development.