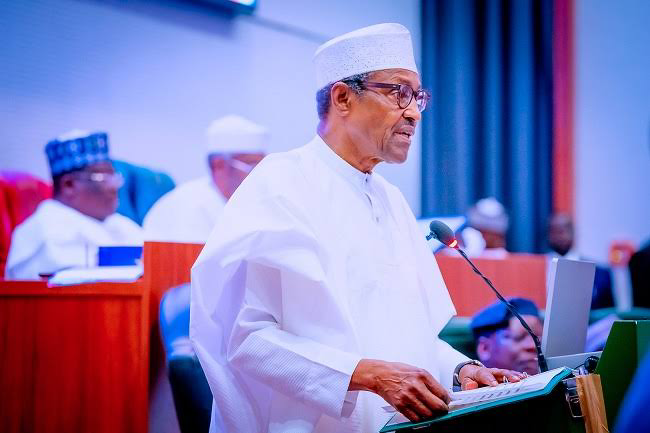 President Muhammadu Buhari on Saturday inaugurated the Pinnacle Oil and Gas FZE Terminal in Lekki, Lagos, saying the operations of the facility have eased congestion in the Apapa area, reduced cost and delivery of petroleum product distribution to many parts of our country.

In a video message at the inauguration of the facility, the President congratulated the Chief Executive Officer of the company, Peter Mbah, for establishing the massive terminal facility and providing hundreds of jobs to Nigerians.

The President described the investment as a demonstration of the success of his administration’s agenda towards transforming the nation’s economy, explaining that government looks forward to many more investments of this magnitude.

Assuring investors of the continued support of the Nigerian Government in efforts to elevate the growing prosperity of the country, President Buhari said:”Provision of energy security is one of the cardinal points of our administration.

‘‘We have recognised that seamless supply and distribution of petroleum products is challenged by infrastructure deficit and complicated by the congestion in the Apapa areas of Lagos since the start of our administration in the year 2015.

”We provided targeted support to the energy industry by providing an enabling environment, including regulatory facilitation, to ensure investment in critical infrastructure.

”I am happy today that Pinnacle Oil and Gas limited leveraged the opportunities and established this massive terminal facility.

”I am happy to also note that further expansion works which are starting will further provide incremental value, especially more employment to our teeming youth population.

”The success of our agenda to transform our country is clearly demonstrated by this massive investment and the obvious contributions it has made to our overall economic well-being.”

Reforms in the oil and gas

President Buhari also reiterated that Government would continue to encourage and support investors to take advantage of the ongoing reforms in the oil and gas sector as enshrined in the Petroleum industry Act and replicate the feats achieved by Pinnacle Oil and Gas limited.

The CEO of Pinnacle expressed confidence that the terminal with over one billion litre-capacity would fulfil its promise by positively impacting the downstream oil and gas industry.

Mbah noted that the ultra-modern purpose-built petroleum products intake, off take and storage facility will facilitate the efficient receipt of imported petroleum products, improve general energy security in the country and trigger significant savings in costs of products at the pump.

He revealed that the company is already in advanced conversations with the Dangote group regarding collaborations to complement the operations of the nearby Dangote refinery which is soon to come on stream, with a view to forming the nucleus of what will become Africa’s largest energy logistics hub.

The energy chief thanked President Buhari, Federal and State authorities and the host community for their unflinching support in making the project, which commenced in 2011, a reality.

Describing the facility as a world class petroleum terminal with the capacity to handle products in two directions both import and export, Mbah explained that: ‘‘Mother Vessels arriving at the facility will have the opportunity to berth at either of our two offshore berths. Either the Conventional Buoy Mooring (CBM), which is in 17m of water depth and can handle vessels of up to 120 million litres, or our Single Point Mooring (SPM), which is in about 23m of water depth and can handle vessel sizes of up to 200 million litres.

”These moorings are connected to our storage facilities by four networked pipelines of 40km total length.

”These pipe networks are designed to empty the vessels in a maximum of two days, a significant improvement on the previous duration which could take up to 30 days.

”Our shore tank farm is currently able to handle up to 300 million litres of Premium Motor Spirit (PMS) as well as diesel or Automotive Gas Oil (AGO), and the facility is designed to permit rapid discharge into trucks for evacuation at a rate of up to 20 million litres per day.”

Mbah disclosed that the funding for the facility, which is over $1billion, was through a consortium of Nigerian banks.