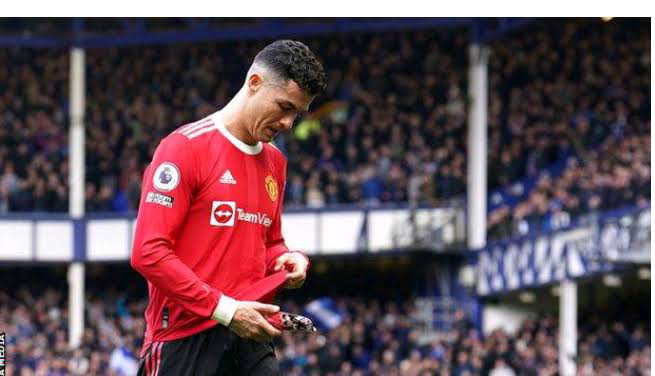 Police are investigating an incident where Cristiano Ronaldo apparently slapped a phone out of a supporter’s hand as he left the field after Manchester United’s loss at Everton.

“As players were leaving the pitch at 2:30 p.m., it was reported that a boy was assaulted by one of the away team as they left the pitch,” Merseyside Police said Sunday. “Inquiries are under way and officers are currently working with Everton Football Club to review CCTV (video) footage and are carrying out extensive witness enquiries to establish if an offence has taken place.”

Ronaldo said it was “never easy to deal with emotions in difficult moments such as the one we are facing.”

“It’s never easy to deal with emotions in difficult moments such as the one we are facing. Nevertheless, we always have to be respectful, patient and set the example for all the youngsters who love the beautiful game,” Ronaldo wrote on his Instagram.

“I would like to apologize for my outburst and, if possible, I would like to invite this supporter to watch a game at Old Trafford as a sign of fair-play and sportsmanship.”

In a video that is going viral on social media, Ronaldo was filmed hitting a phone out of his path as he trudged past supporters who were trying to film the Manchester United players. Sky Sports News reported that Manchester United are looking into an incident.

Coming to the match, Manchester United’s miserable season continued as Everton boosted their Premier League survival hopes with a 1-0 win at Goodison Park.

Out of all cup competitions, United were looking to earn a victory that would have moved them level on points with Tottenham Hotspur in fourth.But their task was made all the more difficult when Anthony Gordon gave Everton a first-half lead.

For the Toffees, hovering above the relegation zone, the nerves showed after the break, but the visitors lacked the quality to get back into the match despite a wealth of attacking options on the pitch.

A late Cristiano Ronaldo effort was as close as United came to a leveller as they slipped to a loss that leaves the team with the most English top flight titles ever seventh in the standings, three points behind Spurs, who play Aston Villa later on Saturday.

Everton defended for their lives at the death, hanging on for a precious victory that helped them pull four points clear of 18th-placed Burnley, who travel to Norwich City on Sunday.

“We don’t score, we don’t even create proper chances to score,” United goalkeeper David de Gea told Sky Sports. “I don’t know what to say, to be honest