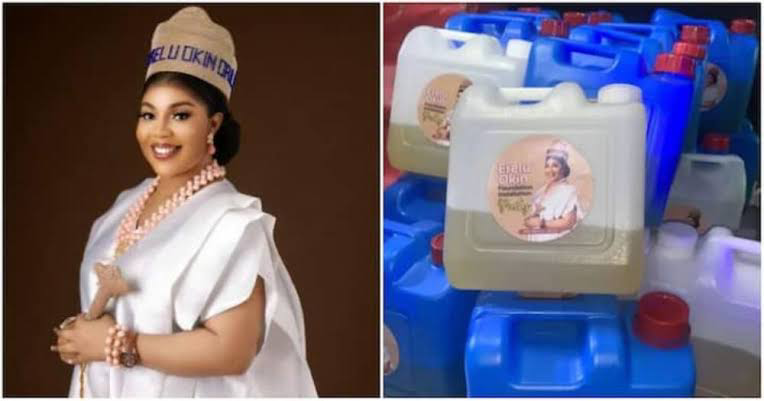 The Lagos state police command says it arraigned Ogbulu Chidinma Pearl, a socialite better known as Erelu Okin, who distributed petrol as souvenir at her party.

On March 4, Pearl distributed petrol souvenirs to guests at an event organised to celebrate her chieftaincy title.

Videos of the distribution of petrol-filled jerrycans at the event had elicited reactions on social media.

The Lagos state government sealed off Havilah Event Centre, where the party was held, for contravening public safety rules.

Subsequently, the party host apologised for sharing petrol souvenirs, adding that her intent was “just to show appreciation” to guests.

The event took place when Nigerians were battling petrol scarcity, after the supply chain was disrupted owing to the importation of off-spec petrol.

On Tuesday, Adekunle Ajisebutu, Lagos police spokesperson, in a statement, said the party host was arraigned on a four-count charge before the special offences (mobile) court, on Monday.

Ajisebutu disclosed that Pearl was granted bail by the court and the case adjourned to March 24.

“The suspect, Ogbulu Chidinma Pearl, was arraigned on a four-count charge of conduct likely to cause breach of peace, endangering human life by distributing combustible matter in a public gathering, intent to do harm to another and unlawfully carrying on the business of storage and containerising petroleum product without permit,” the statement reads.

“Ogbulu was arraigned yesterday 14th March, 2022 at the Special Offences (Mobile) Court of Lagos State in the Ikeja Magisterial District, Holden at Oshodi.

“The commissioner of police reiterates the command’s commitment to protecting lives and property and further warns citizens against acts capable of endangering human lives.”