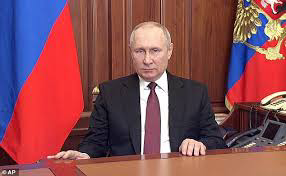 In this latest chilling report, it’s evident Vladimir Putin waas already aware that his future actions would bring unrest even amongst his own compatriots. Just a few years ago, the Russian president was closing deals with other countries and getting along fine with most of them.

But his recent desire to conquer Ukraine and fight against the West has brought him to commit war crimes that will inevitably turn him into a pariah. According to a report from Inside Edition, close ties to the Kremlin who leak information to them confirmed a chilling action Vladimir Putin took about a month ago. According to the report, the Russian president suddenly started firing his own personal staff, there were about 1,000 people who lost their jobs.

When we say personal staff, we mean Russian employees who actually serve him his food and tend to him on a regular basis. It was also reported that Vladimir Putin keeps a specific staff who always tastes his food before he starts eating.

All of this behavior is very common from dictators or tyrants who are usually afraid for their lives. Venezuela’s dictator Nicolas Maduro has the same type of behavior that Putin began to display since before the invasion. Texbook dictator behavior that doesn’t surprise anybody. It is obvious that Putin is already fearing a possible coup and many assassination attempts from his own people. We know from experience that Vladimir Putin tends to poison his own opponents. But, is this even a possibility for Russians?

Who should Vladimir Putin fear the most?

Apart from the people who interact with him on a daily basis, there’s a clear misconception of who should Vladimir Putin fear the most. There are the obvious choices with Russian oligarchs, who hold insane amounts of money and property. But the ones who truly hold any kind of power over Putin are the heads of the military, they are the ones who hold the power to possibly overthrow the Russian president at any given moment.

If there’s any indication that his so-called ‘military operation’ is not going according to plan, Putin can kiss his power goodbye. Thus far, the many losses inside the Russian army have been predicted by their president. But there’s a clear push from the West through sanctions that are hurting Russia’s economy on a deeper level. Time will tell if the mad Russian president will be overthrown or not.