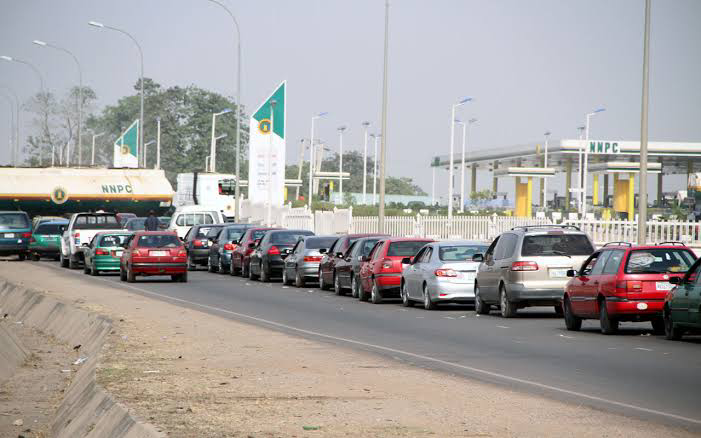 Barely a month of respite, dreaded petrol queues have resurfaced in various parts of the Federal Capital Territory (FCT), where some oil marketers claim to have run out of stock and cannot immediately get fresh supplies due to ‘several reason’.

From Kubwa to Wuse; Central Business District to Apo, only few filling stations operated and sold petrol. Motorists queued to get the product, just as they lamented that the scarcity nightmare haunts like an apparition.

The filling stations that sold petrol said they were getting supplies from depots without any interruption, wondering why other marketers claimed to have run out stock and could not replenish.

A petrol pump attendant at Shema filling station along Kubwa expressway had this to say.

“Look at three tankers filled with petrol in our premises. They are awaiting the current supply to finish before they discharge. We have sufficient supplies and I wonder why others said there is no petrol. Even during sallah, we had products and operated fully”, he said.

When contacted, the Spokesman of the Nigerian National Petroleum Company Limited (NNPC), Mr Garba Deen Shehu assured that the matter was being urgently addressed to ensure it does not snowball into another scarcity crisis within the FCT.

“The matter is being addressed, I can assure you. I’ll get back to you later”, he told Daily Sun on phone.

Some motorists who spoke with Daily Sun said the ugly development was already causing them palpitations, urging relevant authorities to address the issue.

John Ibe, a commercial van driver lamented. “I was just taking a consignment to a client in Zuba from Wuse and I noticed that there were petrol queues in all the filling stations that operated along that corridor on Saturday.

“The thoughts of petrol scarcity alone is enough to give one a heart attack. Let those concerned address this issue immediately. We already have enough crisis on our hands. Let this not compound them”, he pleaded.