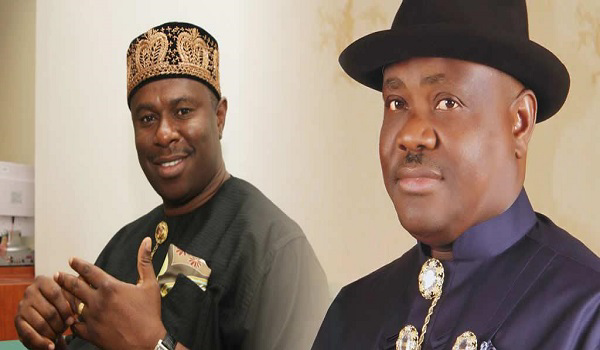 A former member of the House of Representatives, Dr. Dakuku Peterside, yesterday demanded the release of a federal legislator, Farah Dagogo, within 48 hours.

Peterside, who said Dagogo’s arrest has no locus standi in law or statute, including the Miscellaneous Offences Act, described Wike as a neo-fascist and dictator desperate to gag free speech and democratic rights of Rivers citizens.

He challenged the governor to justify his reasons for the arrest of the lawmaker other than his quest to remain a political alpha and omega who would not brood any fair contest.

Insisting that the police also erred in executing the arrest without a known court warrant of arrest, Peterside said the state would not allow Wike to prosper in his quest to turn the state into an Italy of Benito Mussolini or Adolf Hitler’s Germany where fascism held sway until the world rallied democracy against them.

He said: “Rivers State cannot become an Italy of Benito Mussolini, or Adolf Hitler’s Germany where fascism and dictatorship contracted an evil marriage of convenience that bestrode and muzzled free speech and fundamental rights of citizens.

“What Wike is working at is to annex every independent mind and cow every Rivers citizen into sheepish acquiescence. But what he plays ignorant of is that from the times of Dappa Biriye, Melford Okilo, Obi Wali, Timothy Birabi, all nationalists and democrats, Rivers had never suffered fools to muzzle them. So, we shall keep to that historic attitude and will never surrender to Wike and his goons.”

Peterside, the former director general, Nigerian Maritime Administration and Safety Agency (NIMASA), queried Wike on how he obtained evidence linking the lawmaker to an alleged disruption of proceedings at the Rivers State Secretariat of the Peoples Democratic Party (PDP).

He added: “Wike had lied at several times such that these days his claims must be subjected to forensic investigation before they are believed. So, Rivers people need to know how he proved Dagogo’s link to whatever happened at their party secretariat.”

Calling on lovers of democracy and free speech to condemn Wike and his fascist style of governance, Peterside reiterated his 48-hour ultimatum to Wike to order the release of the detailed lawmaker.

He said: “Wike has 48 hours to ensure that Honourable Farah is set free and allowed to continue to pursue his political aspiration. Nothing short of that shall avail. Wike cannot be junketing in pursuit of his presidential ambition using Rivers State resources while wickedly gagging another on the altar of ego. He must let Dagogo go

PREVIOUS POST Kenya To Ban Importation Of Second-hand Buses, Trucks From July, To Increase Safety On The Roads
NEXT POST Anti-graft Agency, EFCC Probes Attorney-General, Malami’s Aides Over Sale Of Presidential Pardon To Over 100 Convicts