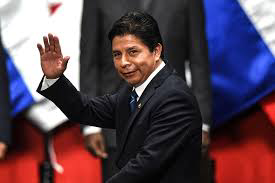 Peru’s President Pedro Castillo has been detained by police in capital city Lima, a source with knowledge of the case told CNNE, after lawmakers voted to oust Castillo in a tumultuous day for the South American nation.

Vice President Dina Boluarte is expected to be sworn in as the new President of Peru, but would need to gain cross party support to be able to govern.

A majority of 101 members in Peru’s 130-person congress voted to impeach the embattled Castillo on Wednesday afternoon, following an attempt earlier in the day by Castillo to dissolve the body and install an emergency government.

Castillo’s call for parliamentary elections to work on a new constitution earlier in the day had prompted a string of cabinet resignations, fiery reactions from top officials and condemnation from regional neighbors.

Before the congressional impeachment vote, Boluarte herself criticized Castillo’s dissolution plan on Twitter. “I reject Pedro Castillo’s decision to perpetrate the breakdown of the constitutional order with the closure of Congress,” she wrote on Twitter. “It is a coup that aggravates the political and institutional crisis that Peruvian society will have to overcome with strict adherence to the law.”

allegedly coordinating the criminal network. Her attorney, Benji Espinoza, has stressed her innocence and argues the investigation against the first lady includes “a number of flaws and omissions.”

And her sister-in-law Yenifer Paredes is under investigation for allegedly being a part of a criminal organization, money laundering and aggravated collusion. She was in custody until a judge revoked her “preventive detention” for 30 months. She too has denied any wrongdoing.

“My daughter, my wife, my entire family have been attacked with the only purpose of destroying me because they don’t want me to finish my term, I promise you I will finish my term, I’m not corrupted,” he said during a televised speech from the Presidential Palace on October 20.

In the same speech, Castillo admitted some of his closest allies should face justice over allegations of corruption, saying, “If they betrayed my trust, let justice take care of them.”