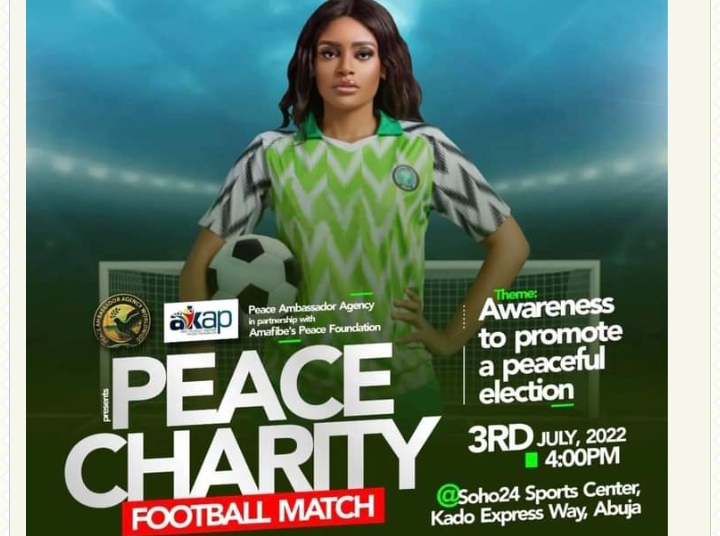 Four football teams are set to test their might in Peace Charity Match which is aimed at promoting a peaceful election in Nigeria in 2023 and beyond through awareness campaign among voters education and political parties.

The Peace Charity Football Match is organised by Amb Kingsley Amafibe Peace Foundation in Partnership with Peace Ambassador Agency Worldwide, and will also feature an international sports brand, ‘SuperSports Media’ making and appearance alongside other mainstream media in the country.

According to the organisers, it is aimed at awakening the mindset of every critical stakeholder in the Nigerian project towards peace building and capacity development.

“It is expected to be one of the biggest meetings of entrepreneurs meet entertainers.
“Peace Charity Football Match will also feature running awareness for voters education and peaceful election,” says the organisers.

Also making appearance to grace the novelty match are some Nigerian celebrities and businessmen that include Dozie Nwankwo, Abba Bichi, MC Tagwaye, amongst others.

PREVIOUS POST Wike visits Tinubu in France
NEXT POST NLC to embark on one-day protest over ASUU, others’ strike