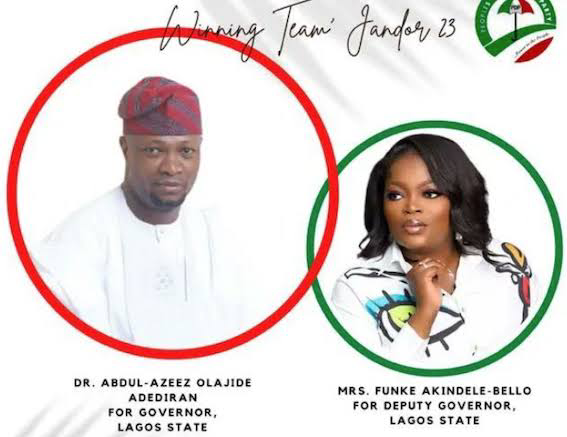 Jandor, in a video on Facebook said his choice of a running mate was from the clear understanding of the task ahead and the need to work with a co-visionary with shared passion for the emancipation of the good people of Lagos.

He described Akindele as a personality who is the epitome of a selfless service and philanthropy, an amazon who would firmly stand with him as they queued on the side of the people, as the journey demanded focus, resilience and tenacity.

My running mate is someone who is large-hearted and has a rich history of service and advocacy, a successful entrepreneur who has grown her business from zero to the success it is today, a practitioner and an employer of labour in the entertainment industry, an amazing talent whose creative works have won awards over and over again.

“An Ikorodu born diva who has through several of her projects, focused and continues to campaign the need to positively transform our ghettos and their inhabitants.

“I am proud to present Bar. Olufunke Ayotunde Akindele as my running mate. Our candidacy is a clearer departure from the norm and together, we will serve and offer you a breath of fresh air,” he said.

Jandor boasted that he singlehandedly moved a multitude of followers of the Lagos4Lagos Movement from the current ruling party to the PDP.

“The groundswell also saw my emergence as he party’s flagbearer and gubernatorial candidate for Lagos, having participated in the international democracy that exists within the party

From the outset of this journey seven years ago, I have pledged my total commitment to the crusade of transforming the state of Lagos from her touted wealthy status on paper to that in which the residents’ standard of living is at par with the state’s wealth and resources to a state where development is not concentrated in just a few isolated locations but to that which leaves no one in doubt across the state that our Lagos can work for all of her residents.

“Some of these things don’t require rocket science to fix, what they require is an emotionally intelligent, listening and sensitive government that will not need a second level of approval to respond promptly to the needs of the people, a governor that is not tied to the apron string of an individual and a servant leader who will bend backwards to accommodate the genuine interest of the people,” he said.