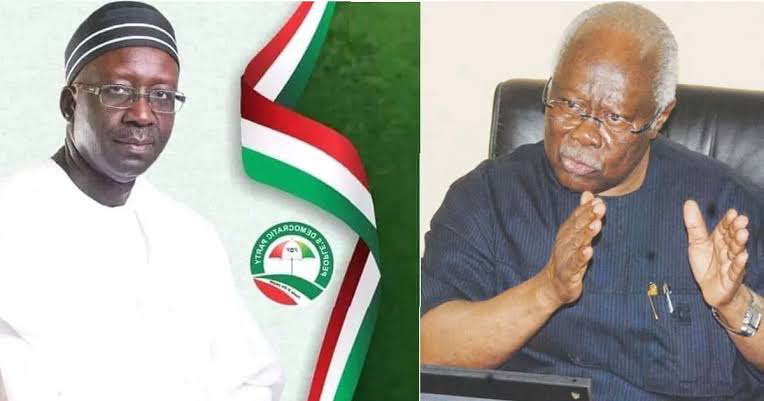 The South-West arm of the Peoples Democratic Party has joined the push for the resignation of the National Chairman of the PDP, Iyorchia Ayu.

Notable South-West members of the PDP told Sunday PUNCH on Saturday that with the All Progressives Congress picking its Presidential candidate from the South-West in the person of Bola Tinubu, the PDP would also need an influential politician from the region to be the party’s chairman.

There are demands from the camp of Governor Nyesom Wike of Rivers State for Ayu to resign as the party’s chairman.

The demand was among the conditions given by Wike who is still said to be aggrieved over Atiku’s refusal to pick him as a running mate. Already, Wike and Atiku have begun meeting with a view to ensuring that a compromise is reached before the commencement of campaigns next month.

However, Sunday PUNCH learnt that the South-West is also demanding Ayu’s exit as a condition to support the party.

“Tinubu is campaigning as the candidate of the Yoruba people. Even Sanwo-Olu said recently that all Yoruba people must see Tinubu as their personal project. The PDP needs to make a huge concession for the South-West which has the second largest voting population after the North-West,” a member of the State Working Committee in Ekiti State said.

Also speaking to Sunday PUNCH, a former Deputy National Chairman of the PDP, Chief Bode George, said Ayu must leave immediately in the spirit of fairness.

George, who said he was speaking as a national leader and not on behalf of the South-West, said there was a need for the region to be given a sense of belonging as all the key positions in the party were being occupied by northerners.

“Ayu needs to resign as chairman immediately while the South-West gets the position in the spirit of fairness. I cannot campaign for the party in the South-West in an atmosphere where there is no fairness. What will I tell our people?” he asked.

George, who was the Director-General of the PDP Presidential Campaign in 2007, said the PDP could pick an interim chairman from the South-West just for the purpose of fairness.

He argued that refusing to take Nigeria’s diversity into consideration would make the PDP no better than the APC which is pushing a Muslim/Muslim ticket.

“NEC can appoint an acting chairman from the South-West in order to give the region a sense of belonging. Ayu promised to leave office once the PDP produces a northern Presidential candidate. For the sake of fairness, he needs to step down immediately.

“The PDP as presently constituted does not reflect Nigeria’s diversity. The North produced the Presidential candidate, the national chairman and the BoT chairman and they want the South to accept this. Would the North have accepted this if it was the other way around?” he asked.

Attempts to get a response from the National Publicity Secretary, Debo Ologunagba, proved abortive as he did not respond to repeated calls on Saturday.

However, a member of the National Working Committee who wished to remain anonymous said removing Ayu now would be too risky.

The official, who preferred not to be named because he was not authorised to speak to the media, said the PDP Constitution states that whenever a national officer of the party resigns, he must be replaced by someone from his region.