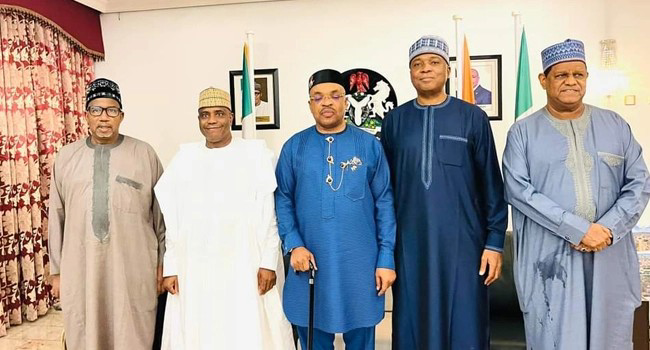 The meeting was held on Monday night at the Government House in Uyo, Akwa Ibom capital city.

Commenting on the meeting, Governor Emmanuel, welcomed the delegation to the state, affirmed his support for the “One Nigeria” course, and stressed the need to build a team of patriots to tackle the nation’s challenges on time.

According to him, the task of rescuing Nigeria was way beyond individualism and partisanship, rather that it requires a team that can wake up and say enough of certain things and then put things in the right perspective, to rescue and restore the country, as a team.

Governor Emmanuel described the delegation as a people that love Nigeria, maintaining that they look forward to what can be made out of the country’s bad situation at the moment.

“This is the time we have to look inwards and reappraise, then look at certain things we must do and do it right, and timely.

“That’s why you see this caliber of people coming together trying to find a consensus and to find a common ground to say that we are all but one.

“We don’t have any other country to go to. That’s the whole essence of all the meetings,” he said.

Speaking on behalf of the delegation after a closed-door meeting, Saraki thanked Governor Emmanuel for playing host to the delegation and lauded his patriotism and commitment to uniting the party and for championing the ‘One Nigeria’ agenda.

Saraki described Governor Emmanuel as a key stakeholder in the party and said the meeting was to brief the Akwa Ibom Governor on the resolve to put the interest of the country first in their quest for the top job and to unite the party.

“We’ve been going around the country and we are here to meet with Governor Udom Emmanuel as a key stakeholder, to brief him of our intention to find a way of uniting us and to put the country and the party first and to inform him of our intention to have a consensus arrangement, because that is what we believe will make the party stronger,” Saraki said.

“We’ve all agreed that where we are now in Nigeria, it has become very critical that we prepare well for 2023 and we can only do that when we are selfless and united. That’s why we are here,” he added.

The immediate past Senate President, therefore, expressed optimism that only the PDP can reverse the insecurity currently plaguing Nigerians.

He explained that even though each of them may have had individual ambitions the ambition of uniting Nigeria, rescuing it from insecurity and economic instability, is a greater ambition.