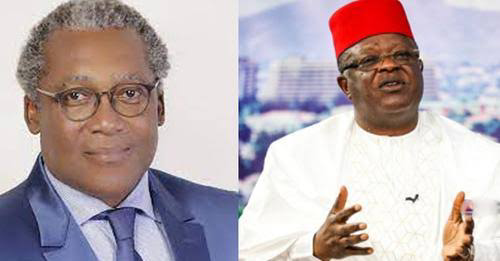 The Peoples Democratic Party (PDP) says it has submitted the names of its nominees to replace David Umahi and Eric Igwe, governor and deputy governor of Ebonyi, respectively, to the Independent National Electoral Commission (INEC).

A federal high court sitting in Abuja had, on Tuesday, ordered the removal of Umahi and Igwe from office, following their defection to the All Progressives Congress (APC).

Umahi had defected from the PDP to the APC in November 2020.

Inyang Ekwo, the presiding judge, ruled that the constitution does not recognise transfer of ballot from one party to another.

There is no constitutional provision that made the ballot transferrable from one party to the other,” Ekwo held.

The judge also ordered INEC to receive — from the PDP — names of persons to replace Umahi and his deputy, or in the alternative, conduct a fresh gubernatorial election in Ebonyi state in line with section 177 (c) of the 1999 constitution, as amended.

Speaking on the development at a media briefing on Tuesday, Iyorchia Ayu, PDP national chairman, said the party has nominated Iduma Igariwe and Fred Udogwu to replace Umahi and Igwe.

“For position of deputy governor, the party is putting forward Mr Fred Udogwu.”