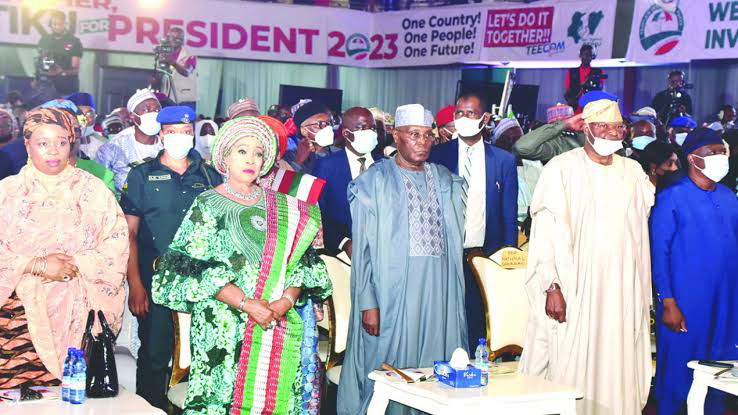 Some presidential aspirants from the North on the platform of the Peoples Democratic Party (PDP) again met on Thursday to discuss how a consensus candidate can emerge from among them.

While the Sokoto State governor, Aminu Tambuwal; Bauchi State governor, Bala Mohammed, and former President of the Senate, Bukola Saraki, were present at the meeting held in Abuja, Atiku Abubakar was conspicuously missing.

Recall that these aspirants had on Sunday met in Bauchi to chart a way forward on how to produce a consensus candidate.

Speaking with newsmen shortly after the meeting, Saraki said they will also reach out to former Vice President Atiku Abubakar and others on this development.

He said: “We want to inform you that we had good discussions. We will continue to share our views about the importance of the unity of our party, because we believe it is only PDP that has the solutions to help us get out of the problem we are in this country today. And it is important as stakeholders, as key leaders of this party, that we’re seen to be united.”

Saraki further said that some of the decisions they have taken is “to embark on reaching out to other aspirants. We’ve already, of course, identified senior leaders of the party and also other aspirants across the country, and also stakeholders, some of their former colleagues and governors.

“We’re also going to reach out to all part of this process of bringing us together and unite the party ahead.”

He said that the message they are trying to pass across is to say that the country is bigger than an individual.

“The major issue and message we want to put across to Nigerians is that the country is larger and bigger than individual interests. And we’re committed to the process. Because we believe that once we unite as PDP, we’ll lay the foundation for a strong party that will help in delivering Nigerians from the challenges they’re facing now and prepare the country to be much stronger as we go ahead,” he said.

Asked if the consensus candidacy will work, the former President of the Senate said, “That is the challenge of leadership. Leadership is to look at interest, but those interests should not be larger than interest of the country.”

He said that consensus is a better opportunity of building a strong government, adding, “Our plan is that yes, there are challenges. Of course, we’re all eminently qualified even those who are not here who we are going to meet with. That’s why we’re going to meet with everybody to reassure everybody, that’s all zones across the country, that let us continue to meet and address those challenges. I’m hopeful that we will overcome those challenges, because our desire for a better Nigeria is what is really driving us.”

Meanwhile, the party has inaugurated its zoning committee to discuss every issue including fair distribution of offices.

Speaking during the inauguration of the 37-member PDP zoning committee in Abuja, the national chairman of the party, Senator Iyorchia Ayu, said that PDP has a history of rotating offices, adding that anybody who doesn’t get it this time should wait after the tenure of whoever will be the next president.

“We believe PDP is going to produce the next president once we start this journey this time. We will ensure it goes round. And it will go round with justice, fairness and the interests of the Nigeria,” he said.

Insisting that it is a tradition in the party to discuss every issue including fair distribution of offices, Ayu said, “The committee will work out modalities for the sharing of positions of Senate President, Speaker of House of Representatives, Secretary to the Government of the Federation (SGF) and other leadership positions in the two chambers of the National Assembly among the six geopolitical zones.”

He said: “We talk, we don’t fight, we resolve issues. There is no issue that is too difficult or too important for the PDP to resolve that is the spirit of the party.”

Charging the committee to look at the zoning dispassionately, Ayu said, “Therefore, I urge all of you to discuss this matter with the same spirit that you discussed at National Executive Council (NEC) because most of you are members of NEC, you knew what happened and you are free to advance your arguments.”

He said the goal is for the party to win power next year and they can only win power by uniting and by working together.

He stated that if the zoning committee pursues it without bitterness, whoever wins others will rally around the person and then the party will win the election next year.

Ayu who charged the members of the committee to remain focused on the bigger picture explained that “because that is what we want. I believe by the time we have the big prize in our hands we will share it, we will rotate it the way we want. If we had not been interrupted on this journey, about six years ago, we have started the same process.”

Speaking while presenting the nomination and expression of interest forms for Bala Mohammed to contest the presidential position, a political pressure group, Bala Mohammed Vanguard (BMV), which earlier in the day, purchased the N40 million form, said, “In January last year, the group met you (Gov. Bala Mohammed) in Bauchi to let you know that Nigerians needed you. We told you we wanted you to contest for the Office of President but you told us you were consulting.”

Speaking on behalf of the group, the Director-General of BMV, Mohammed Jibo, narrated how the group had been on the trail of the governor to join the PDP presidential race, adding, “Today, we have bought the form for you and we are here to present the gift to you. By the grace of God, you will emerge victorious because you are the President Nigerians need.”

Addressing journalists after picking the presidential form for former President of the Senate, Anyim Pius Anyim, Comrade Mayor Samuel, said, “On behalf of the members of the over 350 support groups and partners scattered all over the world, who are driving the Greater Nigeria 2023 Project for Sen. Anyim Pius Anyim’s presidential campaign, I am immensely delighted to address you on our mission to the national secretariat of the Peoples Democratic Party today.

“We are here to obtain the expression of interest and nomination forms for the PDP presidential primary election for Sen. Anyim Pius Anyim.

“We did not obtain the forms on behalf of Sen. Anyim, we purchased the forms for Sen. Anyim to demonstrate our unshaken confidence in his capacity and suitability to lead Nigeria at this point in our history.

“Some of us here today are not practising politicians, but we have decided to take interest and play active roles in the processes leading to the election of the next president of Nigeria in 2023. Nigeria, our dear country, is passing through very difficult times.

“The events of the last few weeks and the bitter experiences ordinary citizens have been subjected to have terribly shaken the confidence and faith of Nigerians in the ability and commitment of the leadership of this country to protect the lives and cater for the needs of Nigerians.

“If by 2023, Nigeria fails to get the leadership question right, the future will be very bleak. We have, therefore, decided to throw our hats in the ring by getting directly involved in the process of choosing who will be the candidate of the PDP, the party Nigerians are hanging their hopes on for a secure, peaceful, united and prosperous Nigeria come 29th of May 2023.

“In order to ensure we get it right this time, we have decided to lead other support groups and partners of Sen. Anyim Pius Anyim to purchase the forms for him to contest in the PDP presidential primary election.”

A group of Concerned Nigerians for Tambuwal, who picked the nomination and expression forms for the Sokoto governor, Aminu Tambuwal, said that they decided to buy the forms for him because he’s capable to rescue the nation.

Speaking with newsmen shortly after picking the forms, coordinator of the group, Olumuyiwa Akinboro (SAN), said, “He (Tambuwal) is strong, he is agile, he is intelligent, he is focused. We have seen him demonstrate good leadership. One of the major things you see in leadership is humility. Somebody that sees himself even lower than the people he leads.

“He is young and vibrant and can take us to the Promised Land and PDP is the platform that can actually actualise this if we do things right.

“Nigerians need him at this time. We are not lacking in strong leaders, we are lacking in people that understand the politics of Nigeria.”