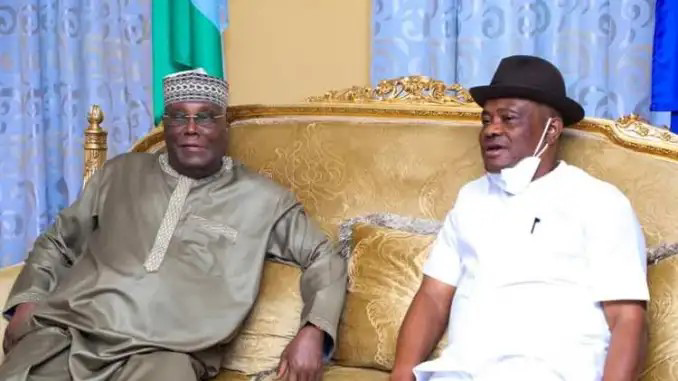 In a statement titled ‘Atiku’s victory, Wike’s resilience and the treachery from Sokoto’, the party support group alleged that treacherous payback for Gov Wike’s past generosity towards a party chieftain from Sokoto state was the most significant factor in Wike’s loss to Atiku.

“We, members of the PDP Frontliners support group congratulate Alhaji Atiku Abubakar for winning the race and we congratulate Governor Nyesom Wike for making such incredible waves and impressive impact in a first attempt for the presidency.

“Obviously, Atiku, our party’s presidential candidate cultivated nationwide network of friendships but now, he needs to unite every cleavage and every individual within the party in order to win the 2023 presidential race.

“As for Governor Wike, an embodiment of formidable courage, unwavering party loyalty and pragmatic resilience without whom PDP wouldn’t have recovered itself after many had taken opportunities exits and even fought with the ruling APC to destroy PDP,” they stated.

“In the PDP’s presidential primaries of Saturday, May 28, 2022, Atiku won but Wike – the man who stood with PDP at all levels in those heady days when our dear Atiku opted for very prolonged stay in Dubai –  did not lose to Atiku; he lost to the great treachery from Sokoto.

“It Is an irony that in the great history of the Sokoto Caliphate which has produced numerous great men and women, there is just one man who symbolizes the greatest iconic treachery in the history of Nigerian politics.

“It is noteworthy that one man  who had enjoyed the most exceptional loyalty and political support, including the sacrifice of time and huge resources from Gov Wike now helped in no small measure to thwart Wike’s presidential ambition.

“For the sake of present and future generations, we must interrogate issues, acknowledge the past and understand the present in order to find a realistic path to the future.

“Again, it is an irony that the greatest beneficiary of Governor Wike’s selfless and self-effacing sacrifice in a previous presidential primaries unfortunately transmuted into a perfidious icon of treachery, effectively sabotaging Gov Wike in last weekend’s primaries.

“One man betrayed Goodluck Jonathan and PDP by disregarding our zoning formula just to sabotage Mulikat Adeola and benefit hugely therefrom, with good support from current Speaker, Femi Gbajabiamila.
:Four years after, it was Gbajabiamila’s turn to be served a hot dose of treachery in 2015 and despite these flaws, Gov Wike pulled out all the resources he could muster to help actualize this man’s presidential dreams in 2019, only for us to realize now that such great beneficiary has become the conscienceless agent of betrayal whose sole contribution  helped actualize the agenda to frustrate Gov Wike’s aspirations.

“Again, we commend Gov Wike for being an exemplary party man who unhesitatingly sacrificed his all for the success and benefit of others and we urge him to actualize his promise of backing whoever wins the presidential race.

“Also, we commend Nigeria’s next President, Alhaji Atiku Abubakar and urge him to genuinely extend a hand of fellowship to Governor Wike whose bravery and consistency has only been rewarded with betrayals from several party leaders; extremely few can dare match the steadfastness and resourcefulness that Gov Wike can bring to the table towards the success of PDP in the 2023 presidential elections,” the PDP Frontliners support group stated.