PDP does not belong to you, Obaseki tells Wike 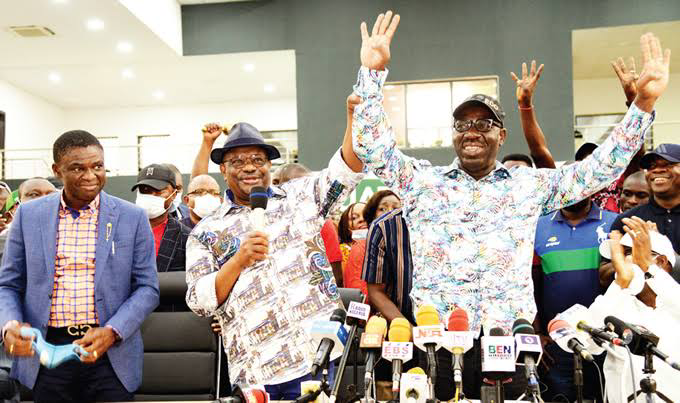 Obaseki took exception to Wike’s attacks on him and his deputy, Philip Shaibu, saying that the Peoples Democratic Party (PDP) is not the personal property of the Rivers governor.

The Edo governor said he will not accept political bullies and overlords, reminding Wike how he had dethroned bullies and high handed leaders.

In an advertorial in The Nation, today, the Edo governor accused Wike of unguarded and disruptive tendencies, urging party leaders to call him to order.

Defending his deputy over his remarks about Edo PDP, Obaseki said Wike shoukd have taken a cue from the way the national chairman, Dr. Iyorchia Ayu, responded to Shaibu’s remarks.

He collaborated Shaibu’s complaint that “the leaders, executives and members” who defected along with him from the All Progressives Congress (APC) have not been accepted, integrated and harmonised into the Edo PDP.

He lamented that the defectors were being vilified and ostracised by a cabal led by Chief Dan Orbih.

Obaseki wondered why Wike is always fond of threatening the party and party leaders.

He said while nobody is against Wike’s desire to run for President, he shoukd not pursue his ambition in a disruptive manner.

Obaseki said: “While Wike is free to use his resources as he deems fit in pursuit of his ambition, he should not attempt to cow, intimidate, cajole and threaten others into doing his bidding. Edo State cannot and will not be procured for anyone’s personal ambition.