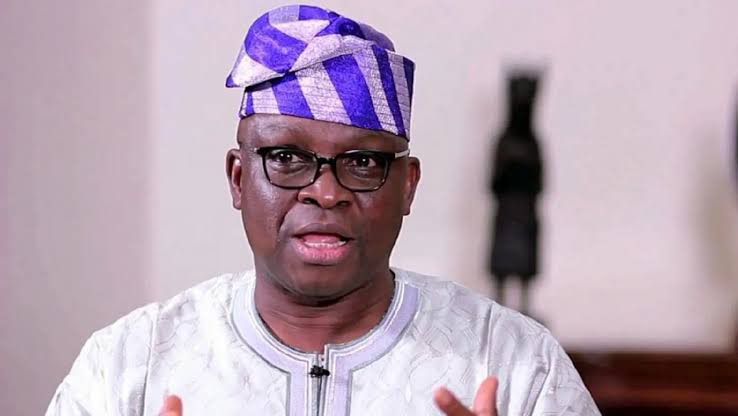 The PDP has been engulfed in crisis since Alhaji Atiku Abubakar emerged as the Presidential candidate of the party in May.

For a while, Governor Nyesom Wike of Rivers State and four other aggrieved PDP governors in his camp have been at loggers with Atiku and the leadership of the PDP.

But when the rift between Atiku and Wike appears to be dying down, Fayose said he saw more serious turbulence in the party.

In a tweet on Sunday, November 6, 2022, the former governor said the crisis rocking the party may get messier if the leadership of the party fails to make serious moves to address issues in the party.

He tweeted: “I see more serious turbulence for PDP more than ever before.I have been silent all this while hoping that things will get better. I advise we do more than we are doing now to resolve this crisis as events in days/weeks ahead may likely get messier. I pray this advice is not ignored.”

This is coming a week after one of the aggrieved governors, Seyi Makinde of Oyo State endorsed the presidential candidate of the ruling All Progressives Congress (APC).

Recently, during a live radio programme in Ibadan, Oyo state capital, the governor said he won’t support the presidential candidate of his party.

Makinde said he would only support Atiku if the party did the needful.

Reacting to this, a chieftain of the party and former minister of Mines and Steel Development, Elder Wole Oyelese described Makinde as an ingrate.

Oyelese while hosting elders and leaders of the party across the 33 local governments in Ibadan said the governor is a very selfish politician.

He said, “Seyi is an ingrate. He has forgotten how some hoodlums almost killed the two of us during his electioneering campaign when I took him round to visit the leaders and elders of PDP in the state. He is a very selfish politician. He is making mistakes because he had betrayed those who assisted him to become governor. We thank God he is making mistakes at this stage. If he had been the one to bring Atiku to Oyo State, he could have wrecked havoc before the election.”