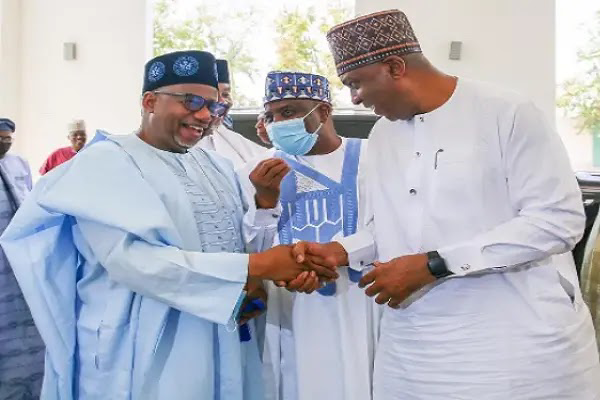 Ahead of the May 28 Presidential primaries of the Peoples Democratic Party, PDP, Northern leaders, Friday, shortlisted former Senate President, Bukola Saraki and governor of Bauchi state, Bala Mohammed in the interim.

In a communique signed by former Vice-Chancellor, Ahmadu Bello University, Zaria, Prof. Ango Abdullahi, the Northern leaders said the election of Saraki and Bala Mohammed was arrived at based on certain criteria adopted in the assessment of the four aspirants who submitted themselves for the exercise

The communique read in part: “For the purpose of this exercise, it is hereby resolved that Gov.  Bala Mohammad from the North-East and former Senate President Bukola Saraki from the North-Central be presented as the Northern consensus candidates for the moment.

“The two would in turn be required to make further concessions so that in the end, one of them would be presented as the consensus candidate, out of the four that presented themselves from the North

“It should be recalled that four major Presidential aspirants in the Peoples Democratic Party, PDP, have met and decided to limit the number of aspirants from Northern Nigeria by forming a consensus among themselves. The candidates that presented themselves for the consensus are

“This was indeed a commendable development and huge sacrifice for the love of country and the northern region in particular on the part of the four aspirants. Consequently, all the four aspirants visited the former military President, Gen. Ibrahim Babangida and gave him the mandate to lead the process for a consensus and agreed to abide by the outcome of the decision.

“The former President encouraged the aspirants to have a resolution within themselves and come up with one candidate, which they reported back to him after some days and asked him to go ahead and pick one out of the four.

“General Babangida on his part opted for inclusion, through wider consultation and assigned me to design criteria and carry out the necessary consultations with elders and leaders across the three geo-political zones of the North.”

In phase one of the exercise tagged “candidates assessment,” the communique added that the opinions of six distinguished persons each from the three geo-political zones were sought with regards to each of the four aspirants. Each of the zonal delegates was allocated two votes to choose the first and second choice making a total of 36 votes overall.”

At the end of this phase, Saraki and Gov. Mohammed scored 10 votes each while Tambuwal and Hayatu-Deen got 7 and 5 votes respectively.

“One of the elders deferred his votes on grounds of continuing consultations with traditional rulers and other major stakeholders. Two members did not cast their second ballots bringing the total to 32 votes cast out of 36,” the communique further noted.

In phase two (zonal assessment), Saraki got 8 votes, while Bala Mohammed and Aminu Tambuwal got seven and two votes respectively. No vote was recorded for Hayatu-Deen.

In the third phase, “PDP previous experiences,” the Ango Abdullahi stressed on behalf of the group: “In the end, the resort was made to the historical antecedents of the PDP with regards to previous northern aspiration and the following conclusion was reached:

“That the North-West has had the opportunity of contesting and even forming government in 2007.

“In 2011, a consensus was made among the four northern candidates, which North-East got but lost at the primaries. In 2019, it got the slot again though the party could not form the government.

“The North-Central has not had a single opportunity to get the PDP ticket since the inception of the current fourth republic.”

to work together to make allowance for further consultations “to foster understanding among themselves, and the PDP community to ensure a rancour-free primary in which all eligible delegates would be free to exercise their right