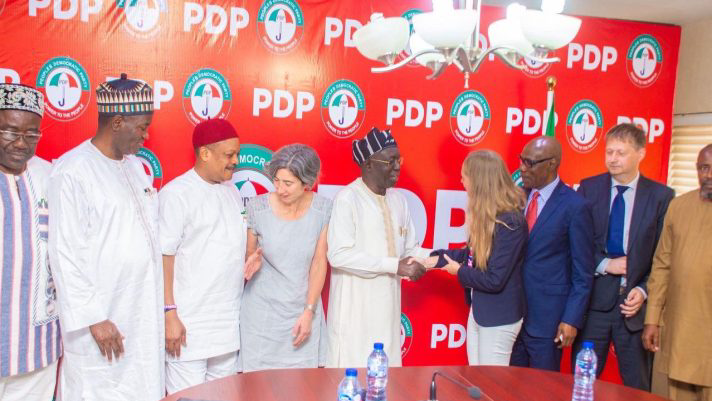 The Peoples Democratic Party (PDP) has alerted the European Union (EU) to an alleged plot to compromise the 2023 general elections.

It called on the European Union to send a high-level and large-sized observer mission to Nigeria to observe and monitor the 2023 general elections, especially given that Nigeria is a very populous country with a very large landmass.

National chairman of the party, Iyorchia Ayu, who made the call while receiving the European Union Election Exploratory Mission to Nigeria, led by Mrs Mette Bakken, at the PDP National Headquarters, said the opposition party was worried about the tendency to compromise the polls.

Ayu said: “We are prepared as a party to do the needful as far as the 2023 general elections are concerned. But we are worried about the tendency and capacity of the State to manipulate critical technologies to our disadvantage. We need to pay close attention so that we are not short-changed again.

“There are security challenges in some states, I think six or so states. We hope the government will stamp out the insecurity there early enough for elections to be held there with transparent outcomes. We will no longer accept questionable harvests of votes from inaccessible areas.

“In the past, those were areas where the ruling APC did what they love doing best: bringing votes that subverted the will of the people. Even though we are going to police our votes, it’s important that the EU sends a large number of observers ahead of the elections.”

He went on: “We need a large EU Observer Mission here. We don’t want token missions. This is because Nigeria is such a big country, with some states being bigger than some EU Member-States. And we need, among the observers, people with technical capacities too. Election observation has shifted from manual to technology. You need to keep talking to the government and critical stakeholders so that the APC does not subvert the democratic will.

“We appreciate the efforts of the EU and thank the Observer Missions for their continued interest in the democratization process in Nigeria which is close to 25 years. We want the world to know that what is happening in Nigeria is democratic, transparent and credible.”

Although Ayu said the PDP was prepared for the 2023 general elections and was ready to police the positive outcomes, he expressed fears that the elections might be compromised, with the ruling APC bearing undue pressures on the Independent National Electoral Commission (INEC).

His words: “We do not want to be short-changed again. We believe we won the presidency in the 2019 general elections. We were injured in 2019, and we don’t want a second injury in 2023.”

On whether freedom of expression was being stifled, Ayu said: “To the best of my knowledge, Nigerians are very vibrant people. Even under military rule, we spoke our minds. It was through the process of speaking our minds that we formed this political party to make sure that the military handed over power.”

He added: “So, it is impossible to suppress the freedom of expression in Nigeria. The freedom space is still open. What the government in power is doing is denying us access to public spaces to hold our rallies. Even at our convention, we had to navigate and put pressure before we got a venue here in Abuja. That must stop.”

Speaking earlier, the leader of the Mission, Mrs Bakken said the EU Mission was in Nigeria to interface with relevant government bodies, Non-Governmental Organisations (NGOs); and, in line with the EU Methodology, look at the possibility of deploying the EU Observer Mission for the scheduled 2023 general elections.
Besides Bakken, who is of the Democracy and Electoral Observation Division, (European Action External Service), other members of the EU Delegation included Frederick Schumman and Kairi Kasmann, both of the European Commission Foreign Policy Instrument. Members of the Exploratory Mission, who arrived in Nigeria on 10th October, 22 will be on the ground till 25th October 2022.